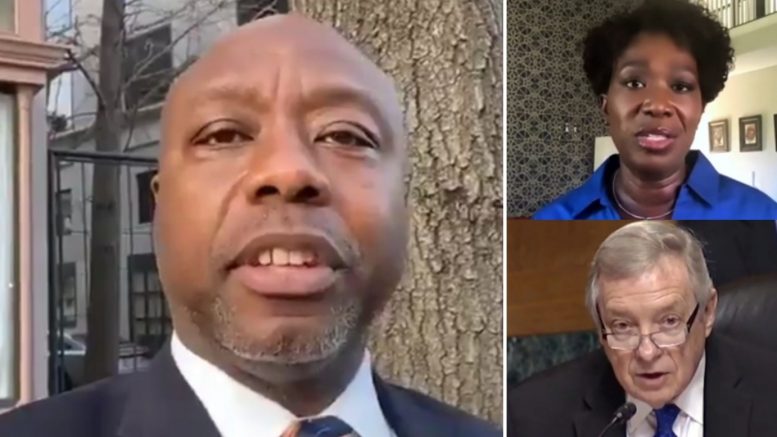 Sen. Scott — who is up for re-election in 2022 — then called on his supporters to “stand up for conservative principles” by supporting him in next year’s contest.

In a video posted to Twitter, Sen. Scott stated as follows:

“The Democrats tell me that they’re the party of inclusion, diversity, tolerance. Well, why are they so intolerant of an African American conservative who wants to just tell the truth?”

“What happened to the party of inclusion and diversity when it comes to conservatives who happen to be Black or Hispanic, who want to speak the truth?

“Why is that not acceptable to people like Dick Durbin who wants to say ‘token,’ or Joy Reid who wants to say ‘patina of diversity’? Why is it okay for them to call us names and be ‘woke’? I don’t understand it.

“Please help us, as conservatives, stand up for conservative principles by supporting me. Thank you so much. God bless you. We need your help.” Video Below

The Left continues to hide behind the shroud of ‘woke’ culture while disparaging Republicans who don’t fit their narrative. What happened to the party of ‘inclusion’ and ‘diversity’? Maybe it’s the Left that’s closed-minded. pic.twitter.com/sGZsht4Hle

In ending, here is Sen. Lindsey Graham — who also represents South Carolina — endorsing Sen. Scott with a thread of tweets:

The conservative movement is so lucky to have my good friend and colleague Senator Tim Scott as one of our leaders.

Tim is one of the strongest voices in America for conservative solutions to help disadvantaged neighborhoods and people. https://t.co/32qtxHudEv

I hope conservatives throughout the nation appreciate my friend Tim Scott. He is truly a fighter for the conservative cause.

We have your back!

WATCH: Reps. Greene & Dingle Get Into A Heated Shouting Match On Capitol Steps