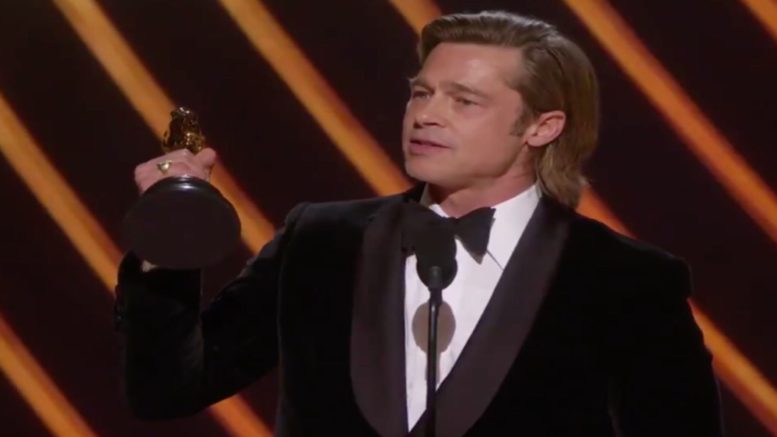 Sunday night while accepting an award during the 2020 Oscars, Brad Pitt took a veiled jab at Republican Senators who voted against calling witnesses during the Senate impeachment trial of President Donald Trump.

The four-time Academy Award nominee won the best-supporting actor accolade for his role as a stuntman in “Once Upon a Time in Hollywood,” reported Fox News.

While accepting an Oscar on stage, Brad Pitt knocked Republican Senators who voted against Democrats’ request to call witnesses in the impeachment trial, specifically for former National Security Adviser John Bolton, who had claimed he was willing to testify “if subpoenaed” by the Senate.

“They told me I only have 45 seconds up here, which is 45 seconds more than the Senate gave John Bolton this week,” Brad Pitt said. “I’m thinking maybe Quentin [Tarantino] does a movie about it. In the end, the adults do the right thing.”

No witnesses were called in the Senate impeachment trial. The Senate had voted 51 to 49 to block a Democratic motion to call new witnesses. Two Republicans, however, Sen. Mitt Romney (UT) and Sen. Susan Collins (ME) voted with Democrats for new witnesses.

President Trump was ultimately acquitted by the Senate in a vote across party lines, with the exception of one Republican, Sen. Mitt Romney (UT). (Video Below)

We leave you with a few responses to Brad Pitt’s jab at the Senate Republicans:

i have to hand it to Brad Pitt for coming up with that brave political statement extemporaneously, without any help from various speech-writing agencies that his people definitely did not contact.

Brad Pitt, winner of Best Supporting Actor, and made a crack about John Bolton not testifying before the Senate during the Trump impeachment trial. Apparently, Pitt is unaware that Bolton has REFUSED to testify without a subpoena.#Oscars2020

Took 10 seconds for the first winner (Brad Pitt) to bash President Trump.
Only surprised it took that long.
As always, this will help Trump not hurt him. #Oscars2020

Brad Pitt, “They told me I only have 45 seconds up here, which is 45 seconds more than the Senate gave John Bolton this week.”

Look, TDS and @realDonaldTrump have now made the Left cozy up to John Bolton. Their illness knows no bounds!

Half of the audience just tuned out over the Brad Pitt Bolton/Impeachment crack. The #Oscars should be about movies, not divisive political commentary. https://t.co/JLYcKEhbCT

(Related: Pat Cipollone Uses House Managers Own Arguments Against Them With Video Clips: “You Were Right”)