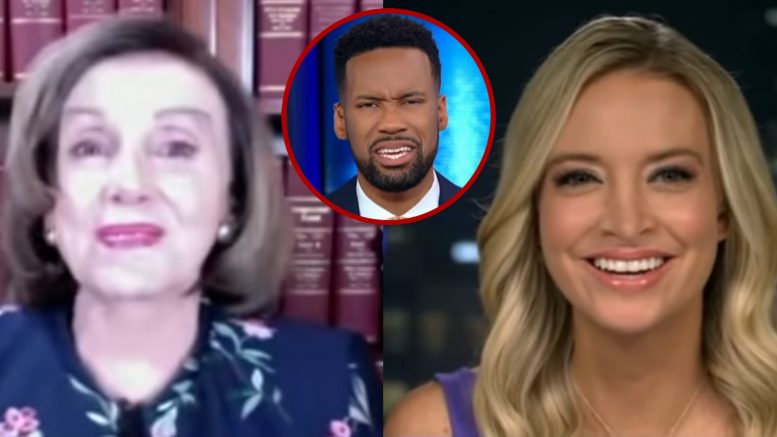 Pelosi told the story during a White House virtual event with the House Democratic Caucus on Wednesday.

Related Article: Rep. Turner Blasts Pelosi Over The Capitol Fence: “This Is A Woman Who Said Walls Are ‘Immoral’”

“I took them for candy at a place, Dylan’s in New York, where they have sort of like swinging doors. You have to get through the doors from one part of the store to the next,” Pelosi said.

“So, here they are, the place is packed and jammed. Kids are making all this noise over there on the side. And all of a sudden, I hear them pronounce, ‘In order to open these doors, we do not say open sesame, we say “Open Biden.” That’s our magic word,’” Pelosi said while laughing. “Open Biden, I love it!”

In response, Kayleigh McEnany told Fox News host Lawrence Jones, “That is quite peculiar, very strange maniacal laugh there at her own joke.”

“But what is really comical when it comes to Nancy Pelosi, every time she attempts to relate to the American people, it always backfires from this open border anecdote that she put forward to standing in front of the ice cream freezer during a pandemic with high class designer ice cream to going into a salon when no one else could. And maybe you’ll remember, Lawrence, we played that loop at the White House press briefing.”

“She was trying to recount an anecdote there with her grandchildren, but I think it backfired and left a lot of us scratching our heads,” McEnany declared. Video Below