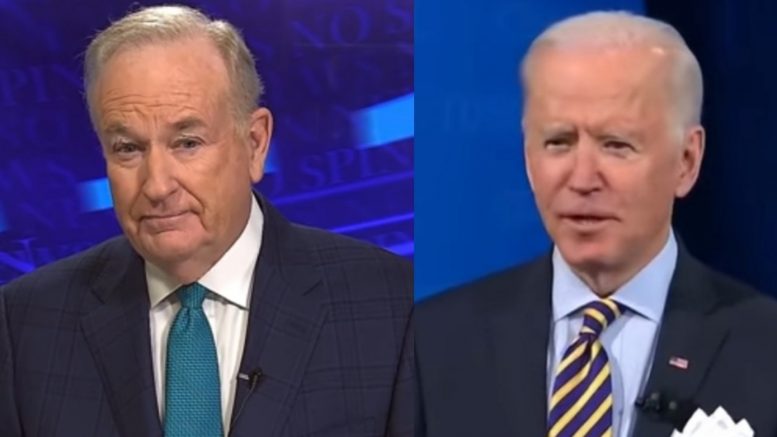 Bill O’Reilly thinks that Republicans have a greater than 50% chance of taking back both the House and Senate in less than two years if Joe Biden “continues to do what he’s doing” as president.

O’Reilly gave the assessment while responding to a member of his audience who questioned why America is still worth fighting for because they feel that “we don’t have much of a country anymore.”

“…Now, we have a bitter populous. You have the ‘Hate-Trump’ and the ‘Love-Trump’ and there’s no compromise between the two,” O’Reilly said as part of his response. “That’s what we’re seeing…Trump is out, Biden is in and Congress is controlled by Democrats who are at the behest of the Progressives.”

He continued, “So that’s where we are. Not a good place, but their hold is tenuous — very, very, very weak. It’s not a strong hold. And if Biden continues to do what he’s doing, then there’s a better than 50% chance Republicans will take both houses in less than two years.”

“So anyway, the cycle of history goes up and down, up and down — doesn’t mean the country’s not worth standing up for,” O’Reilly proclaimed. “This is a country that has given more people on the planet more opportunity than any other country in the history of civilization. And if you don’t stand up for your country, you let the people who want to destroy it win.”

“As the Beastie Boys once sang, ‘You gotta fight for your right to party.’ If you want to party in a traditional way that respects America, then you gotta fight,” he declared. “You gotta stand up.” Video Below