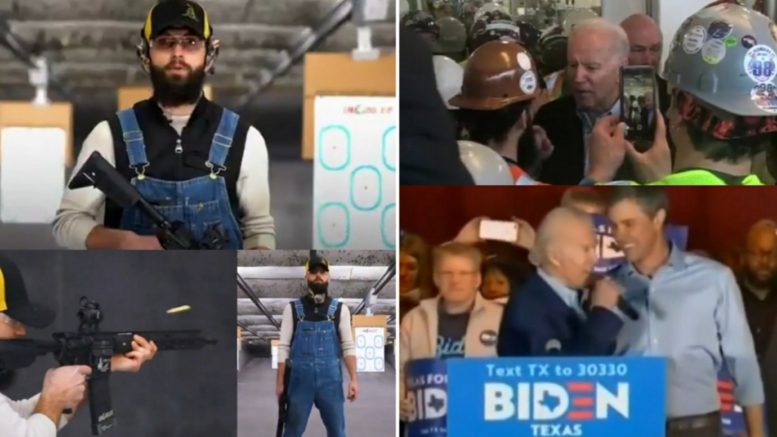 Michigan union worker, Jerry Wayne, had a special message for Joe Biden and other “gun-grabbing” politicians as he unveiled his brand new ‘AR-14’ in honor of his confrontation with the former Vice President earlier this week.

Wayne and Biden clashed over gun control while the presidential candidate made a stop at a factory to speak with auto workers on Tuesday in Michigan. And Wayne couldn’t think of a better way to commemorate the viral moment than to show off his very own ‘AR-14’, which Biden mistakingly referred to during their spat.

In a video posted by the NRA, Wayne can be seen presenting a rifle that was specially made and given to him by Next Level Armament , which has “AR-14” and “You’re Full Of Shit!” lasered on the magazine well.

“I am the union worker that Joe Biden tried to intimidate,” Wayne says as he is seen sporting his new rifle. “Joe Biden wants to take my AR-14. Let’s just not tell him what it really is.”

“My name is Jerry Wayne and all I wanted to do was ask a presidential candidate a question,” he continued. “I didn’t do it to start a fight. All I did was ask Joe how he was going to win over the union vote when he’s planning to go after his guns with Beto O’Rourke.”

He then went on to provide back-up video of Biden making remarks about guns, which Biden accused  the auto worker of being “full of shit” over. “And you say, I’m ‘full of shit’? Really, Joe? All I did was ask you about your own comments,” Wayne said before he played supporting video clips. Video Below

After further making his case against Biden, Mr. Wayne declared, “I think Biden made a huge miscalculation when he threatened to strip us Americans of our gun rights. The Second Amendment was put in place to protect us against a tyrannical government.”

“I have a message for the gun grabbing politicians: Your belligerent behavior has no place in government,” he added. “And you will never, I mean never, touch our guns…They can take away our AR-14s, our AR-16s and all of our 100 round magazines because they don’t exist.”

The union worker concluded, “For every gun-grabbing politician out there, I’ve got four words for you: Don’t tread on us,” and he called on “all patriots” to stand up to career politicans “who have forgotten who they work for.”  Video Below

Related Article: Detroit Auto Worker On His Confrontation With Joe Biden: “He Doesn’t Need To Touch Anybody’s Weapon At All”

Joe Biden threatened to take this union worker’s “AR-14” in a train wreck of a viral video.

That union worker’s name is @JerryWayneAR14 and one day after the interaction, he went out and got an “AR-14” in honor of Joe.

This is his message to America: pic.twitter.com/faRuE2OVR2