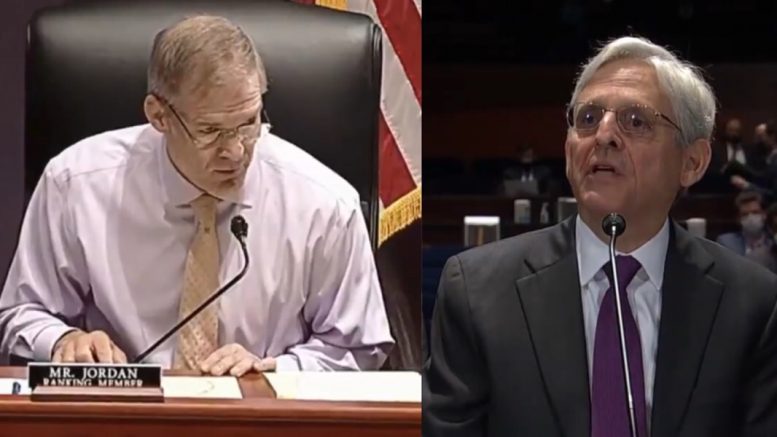 Rep. Jim Jordan (R-OH) at Thursday’s House Judiciary Committee hearing called out Biden’s DOJ for caving to the National School Board Association as Attorney General Merrick Garland issued a memo this month, saying the FBI will investigate threats by parents against school board members who are angry over Critical Race Theory.

“Republicans on this committee have sent the attorney general 13 letters in the last 6 months. It takes weeks and months to get a response,” Jordan said in his opening statement, but pointed out Garland responded to a letter from the National School Board Association in just 5 days.

Rep. Jordan quoted part of Garland’s memo which says in part, “I’m directing the FBI to convene meetings with local leaders. These meetings will open dedicated lines of communication for threat reporting.”

“Dedicated lines of communication for threat reporting,” Jordan reiterated, adding, “A snitch line on parents started 5 days after a left wing political organization asked for it. If that’s not political, I don’t know what is”.

“Where’s the dedicated lines of communications for local leaders regarding our southern border? Something that is frankly, a federal matter. Where’s the dedicated lines of communication on violent crime on our cities? … Nope. Can’t do that. The Biden Justice Department is gonna go after parents who object to some racist, hate-America curriculum,” Jordan said.

“Nope. Can’t focus on the southern border where 1.7 million illegal encounters have happened this year alone. A record,” he pointed out. “A record number. MS-13 can just waltz right in across the border, but the Department of Justice, they’re gonna open up a snitch line on parents.” Continued Below

The Ohio congressman also noted “the same FBI Mr. Garland is directing to open dedicated lines to communication for reporting on parents, just a few years ago, spied on 4 Americans citizens associated with President Trump’s campaign.”

“[The] Clinton campaign hired Perkins Coie, who hired Fusion GPS, who hired Christopher Steele, put a bunch of garbage together, gave it to the FBI. They used that as the basis to open up an investigation into a presidential campaign,” Rep. Jordan explained. “… A few weeks ago, the IG at the Department of Justice released a report that found that the FBI made over 200 errors, omissions, and lies in just 29 randomly selected FISA applications.”

“But don’t worry, the attorney general of the United States just put them in charge of a dedicated line of communication to report on parents who attend school board meetings,” he said sarcastically. Continued Below

Rep. Jordan went on to say, “Mr. Chairman, Americans are afraid. For the first time in my years in public office — [his constituents] — they fear their government. And frankly, I think it’s obvious why. Every single liberty we enjoy under the First Amendment has been assaulted in the last year.”

Jordan also listed the double standards over Covid-19 shutdown orders and the liberties that were taken away from Americans, noting the Biden administration “also wants another dedicated line of communication for reporting.”

“They want a second snitch line. They want banks to report on every single transaction over 600 dollars for every single American to the IRS,” he said. “The same IRS that targeted conservatives the last time Joe Biden was in the executive branch”.

“Jefferson once said ‘Tyranny is when the people fear the government’. We’re there. But I don’t think the good people of this great country are gonna cower and hide. I think your memo Mr. Attorney General was the last straw. I think it was the catalyst for a great awakening that is just getting started,” he added. [Emphasis added]. Video Below

Americans have had enough. pic.twitter.com/SFlYQFiFOR

Jordan also grilled Garland over what “evidence” he has that shows parents are “threating school board members”.

Attorney General Garland’s only “evidence” that parents are “threatening” school board members?

The radically liberal National School Board Association told him so.

-Spying on parents at school board meetings.

-Attacking the right to life.

Just like Joe Biden, Attorney General Garland is no “moderate.”

(Related: Rep. Johnson To Garland: “Did You Seek Ethics Counsel Before You Issued A Letter That Directly Relates To The Financial Interest Of Your Family?”)