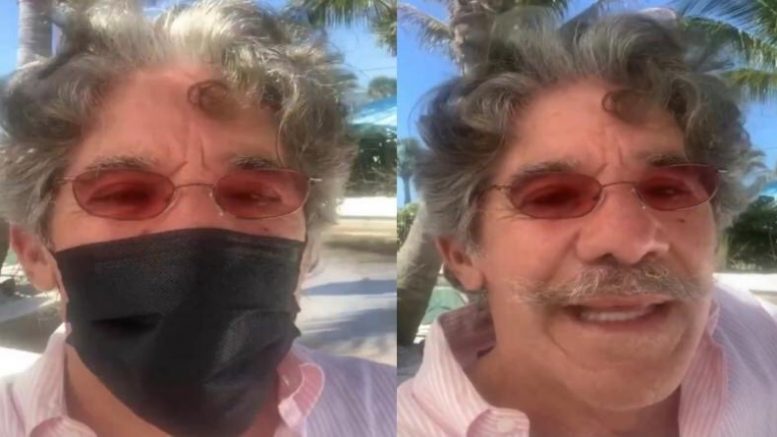 Fox News political commentator Geraldo Rivera took to Twitter Saturday with a video message to former President Donald Trump, suggesting that the 45th President “apologize” for what took place at the Capitol on January 6th.

In his video, Geraldo vented his frustration outdoors in sunny Florida, briefly wearing a mask on his face– while it appeared no one was around him.

“CPAC is going on– the conservative political action– I forget what the C stands for, convention or  committee,” Rivera said. “And they’re obviously very positive of Donald Trump, and I want to talk about that”.

“Ted Cruz, that sleazebag. I mean, for him to go there after that whole Cancun fiasco and try to make a joke out of it, he really is such a lowlife. And I’m not crazy about Josh Hawley of Missouri either,” he vented. “Those two senators more than anyone else in the upper House of the United States Congress, really let the American people down on January 6th”.

He went on to say: “So Donald Trump is clearly being reborn. It’s a renaissance of Trump feelings. And you know, I feel very conflicted about the president. I have deep love for him. We’ve been together, not together, part of each other’s lives. I mean, he’s such a larger than life for many, many years, decades.”

“I would love to welcome him back, but what he did on January 6th, was if not forgivable, something that was deeply disturbing. He was reckless. He threatened the intuitions of American government itself, the republic of the United States,” Rivera claimed. “And he has to apologize to that, I mean, before he gets me back”. Continued Below

“Right now, Adam Kinzinger, Liz Cheney, Anthony Gonzales, Mitch McConnell– those are the Republicans whose ideas I most relate to right now,” he said.

“I would love to have Donald Trump back, because I’m still a Republican, as the head of my Party. But what he did on January 6th, he must recognize was deeply wrong and reckless,” Rivera alleged. Video Below

Meanwhile, users on Twitter fired back, roasting Geraldo Rivera. We leave you with a few highly engaged responses:

You apologize for being wrong on every issue first.

You’re out of touch. Go play with your buddy Juan.

Geraldo has lost it. What a joke.

Please come up for air, you’ve been in the swamp to long.

He doesn’t need to apologize

Why? He didn’t storm the Capitol.

What should he apologized for. The truth will come out! Will you apologize when you see it?

It was preplanned…Trump’s words did not cause this.

The media and your ilk should apologize for sensationalizing every news story. It’s what you do, and the actions of people are the direct result of the media

He was acquitted but you do you boo!

No one has told you? You are a clown. pic.twitter.com/nr8lzpxjuD