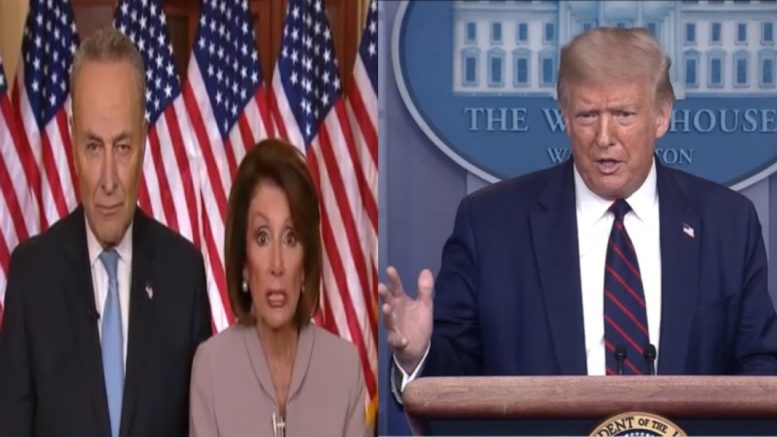 White House chief of staff Mark Meadows also blasted Democrats during a White House briefing on Friday, for rejecting what he said were four different offers to extend the $600 per week federal unemployment boost which expires Friday. “The Democrats have made zero offers over the last three days. Zero,” he said.

One of the offers reportedly made was a four-month extension approved by President Trump at the current rate of $600 per week, assuring more than 25 million Americans currently reviving jobless benefits would be protected until December. But Pelosi and Schumer rejected that deal, Meadows said. Democrats want the $600 jobless benefit to last until the first quarter of 2021, reported New York Post.

“Pelosi & Schumer have no interest in making a deal that is good for our Country and our People. All they want is a trillion dollars, and much more, for their Radical Left Governed States, most of which are doing very badly. It is called a BAILOUT for many years of bad Dem Mgmt!” the Commander in Chief tweeted.

He continued: “Pelosi & Schumer blocked desperately needed unemployment payments, which is so terrible, especially since they fully understand that it was not the workers fault that they are unemployed, it’s the fault of China!”

“Very disappointed in @SenSchumer for blocking the temporary extension of the $600 unemployment benefits,” President Trump expressed on Twitter. “The Do Nothing Democrats are more interested in playing politics than in helping our deserving people. DRAIN THE SWAMP ON NOVEMBER 3RD!” Continued Below

In another tweet, President Trump informed America: “The Democrats are holding back the $1,200 to $3,400 (family of four) checks that were ready to be sent out!”

“What we’re seeing is politics as usual from Democrats on Capitol Hill,” Mark Meadows also said on Friday morning in the White House briefing room.

“The Democrats believe they have all the cards on their side and they’re willing to play those cards at the expense of those who are hurt,” he added. Continued Below

The House Democrats in May passed a $3 trillion HEROES Act bill but it was considered dead on arrival in the Republican-controlled senate.

The bill, which includes massive assistance to states and local governments suffering from the coronavirus lockdown, would allow those who use taxpayer-identification numbers to be eligible for direct cash assistance, paving the way for illegal aliens who don’t have Social Security numbers to be eligible for the $1,200 checks, Daily Caller reported.

House Republicans, however, introduced an amendment that would have prevented illegal aliens from receiving the stimulus checks, but Democratic lawmakers shot it down before passing the bill. The legislation also calls on Immigration and Customs Enforcement (ICE) to reduce its detainee population and bars the administration from withholding federal grant money from localities that refuse cooperation with federal immigration authorities, per Daily Caller.

Senate Majority Leader Mitch McConnell (R-KY) unveiled his own package, a $1 trillion HEALS Act which includes another round of $1,200 stimulus checks to the same group of taxpayers that were meant to receive the stimulus checks after the passing of the CARES Act. Video Below

I offered a simple 7-day extension of the expanded unemployment benefits today so Americans put out of work through no fault of their own can continue to pay rent & put food on the table for their families.

Who could be against this? pic.twitter.com/W3xPnONPqw

We leave you with White House Chief of Staff Mark Meadows and Press Secretary Kayleigh McEnany on negotiations regarding stimulus package negotiations.

(Related: McCarthy Breaks His Silence On Rep. Stanton’s Vote By Boat: “Any Politician Who Doesn’t Show Up For Work Should Take A Pay Cut”)