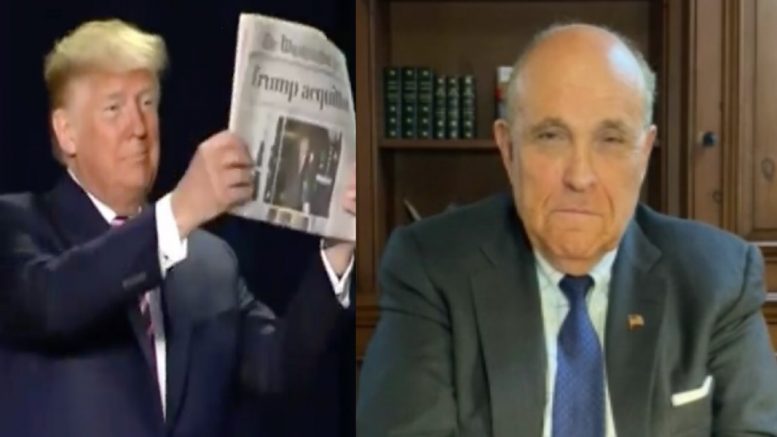 “But it’s really insulting to the American people how the Democrats have just been playing politics and playing around with impeachment when this has set a dangerous precedent for our country going forward,” Stephanie Hamill added.

“We’ve gone through five years of pathological Democratic hatred of Donald Trump, and all its done is been a hindrance to getting things done for America. It’s actually a miracle that Trump was able to accomplish as much as he did, given the fact that the first day that he entered office; they’ve been plotting to impeach him based on false testimony,” the former New York City mayor said.

“I mean, what they did is a crime,” he asserted. “But because of the double standard in Washington, apparently they won’t get prosecuted for it, others will get prosecuted for minor little things. These people are engaged in a five year conspiracy to try to overthrow our government.” Continued Below

“People like [Nancy] Pelosi and [Adam] Schiff, and the guy with the Communist spy girlfriend. … [Rep. Eric] Swalwell and his Chinese Communist girlfriend or [Diane] Feinstein and her 20 year Communist Chinese driver,” he noted.

“We have no idea how much the Chinese have infiltrated the government. They got a president they paid millions to. They have a president sitting in Washington, that if he doesn’t do what they want, they could probably sue him and get their money back,” Giuliani claimed.

Mr. Giuliani appeared to be referring to emails from Hunter Biden’s laptop, which revealed his lucrative deals involving China’s largest private energy company (the former Shanghai-based conglomerate CEFC China Energy Co.)— including an email which he said would be “interesting for me and my family.” Video Below

One email sent to Biden on May 13, 2017, with the subject line “Expectations,” included details of “remuneration packages” for six people involved in an unspecified business venture.

In addition, the email outlined a “provisional agreement” under which 80 percent of the “equity,” or shares in the new company, would be split equally among four people whose initials correspond to the sender and three recipients, with “H” apparently referring to Biden.