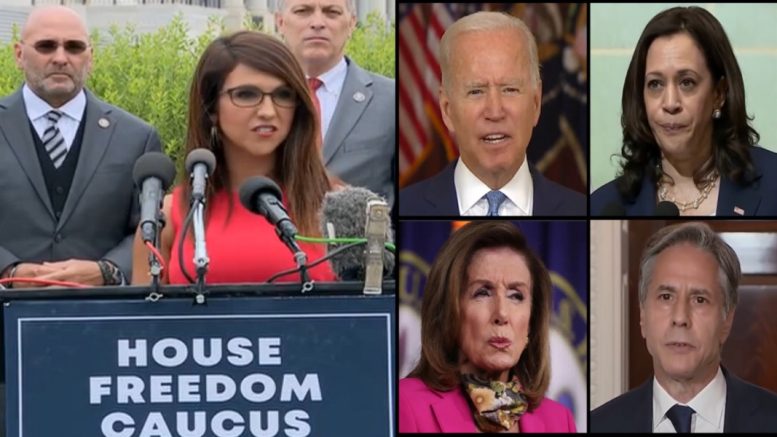 Rep. Lauren Boebert (R-CO) called for the impeachment of 78-year-old Joe Biden and Kamala Harris during a press conference with House Freedom Caucus members on Tuesday regarding the deadly and chaotic withdrawal operation in Afghanistan, resulting in 13 fallen Marines, along with 85 billion in military equipment taken by the Taliban.

“The blame starts at the top with Biden and hand-picked vice president, who bragged that she was right there making the same bad decisions. And if not for her own dereliction of duty, she should be impeached for not demanding we invoke the 25th Amendment,” the Colorado congresswoman said, referring to Harris’ statement that she was the last person in the room when Biden decided to pull all U.S. forces out of Afghanistan.

Rep. Lauren Boebert was referencing the 25th Amendment to the Constitution, which allows the vice president and members of the cabinet to vote to remove a president who is unable to fulfill their duties.

“It is time for action. Impeach Biden, impeach Kamala Harris, and throw in the Secretary of State, if you could get him back from vacation. Take a vote to vacate the chair to get Nancy Pelosi the heck out of here,” she said.

Secretary of State Antony Blinken, who on Monday, claimed there are fewer than 200 Americans that remain in Afghanistan and  who wanted to leave, was in vacation in the Hamptons shortly before the fall of Kabul, The Washington Post reported.

“I hope at this time, at this stage, where we are today, there might be a handful of Democrats who actually might join us in taking a stand for our fallen soldiers, for America, for the Constitution. And if there are any Republicans who have any doubt, know that you will be facing your own primaries. And no amount of your precious money will be able to save you from the uprising of the American people who demand we do something now,” Rep. Boebert expressed.

Says Republicans with “doubts” will face primary challenges: “No amount of your precious money will be able to save you from the uprising of the American people.” pic.twitter.com/9WRsCIQ0zG

The Freedom Caucus, of which Boebert is a member, has already written House Minority Leader Kevin McCarthy calling on him to make a motion to ‘vacate the chair,’ which could trigger a vote that would result in Pelosi’s removal.

They called to use the procedure to end Pelosi’s ‘authoritarian’ rule in July, after she bumped two Republican selections from a select committee on the Jan. 6th Capitol riot.

But for the move to get ‘privileged’ consideration, the GOP conference would need to back it.

The larger obstacle is Democratic control of the House, which presumably would thwart a GOP move to remove the speaker. That is what makes any push to impeach Biden largely symbolic for now – although all that could change if Republicans were to gain control after the 2022 elections.

If Boebert’s moves were to succeed in the 50-50 Senate, next in the line of succession would be Sen. Patrick Leahy of Vermont, 81, the Senate president pro tempore. Continued Below

We in Congress were sent to Washington DC to represent the people.

Not to sit idly by to wait for the next election.

And certainly not to put up with an inept, incapable regime that puts everyone but American citizens first.

We must act to end this national disaster.

(Related: Watch: Rep. MTG Gets A Standing Ovation After Announcing She Filed Articles Of Impeachment Against Biden)