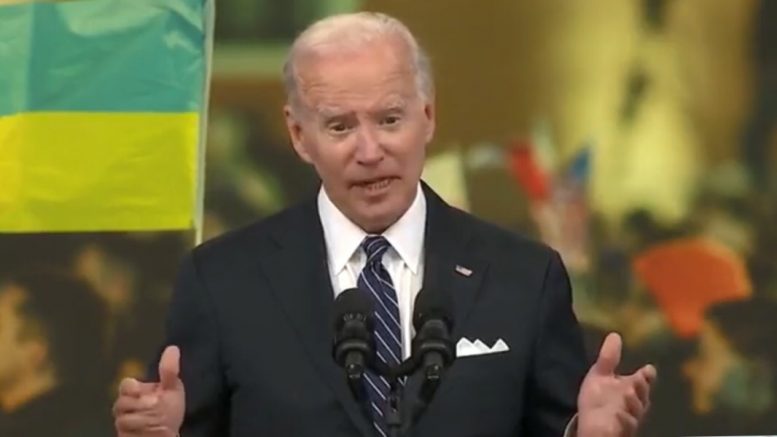 While reading prepared remarks on Wednesday from a teleprompter, 79-year-old Joe Biden suggested that American’s options — amid inflation and rising gas prices — is either deal with the high gas prices or allow Russian President Vladimir Putin to gain more influence in Europe.

While reading off of the teleprompter at the staged White House set, Biden took a swipe at Republicans who have criticized him over the record high gas prices by asking if they would rather abandon the Ukrainian people and let Putin gain more power.

“For all Republicans criticizing me for high gas prices in America, are you now saying we were wrong to support Ukraine and stand up to Putin?” Biden asked.

“Are you saying that we’d rather have lower gas prices in America than Putin’s iron fist in Europe?” he said.

Meanwhile, the price of gasoline was rising, well before Putin invaded Ukraine in February, ABC’s Jonathan Karl pointed out.

Biden: "For all Republicans criticizing me for high gas prices in America, are you now saying we were wrong to support Ukraine and stand up to Putin? Are you saying that we'd rather have lower gas prices in America than Putin's iron fist in Europe?" pic.twitter.com/Z7U8YIFgnM

But gas prices were on the rise long before Russia invaded Ukraine. pic.twitter.com/BP5XxofNH0

Biden also claimed he is “doing everything possible” to lower prices:

Joe Biden is lying to you.