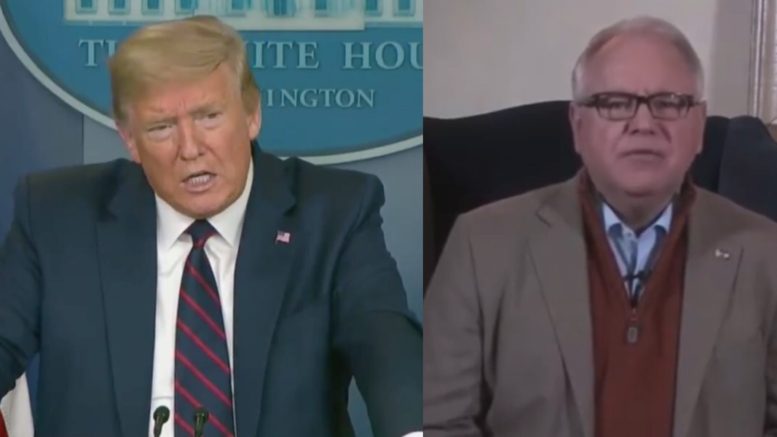 Governor Tim Walz (D-MN) announced on Friday that he was easing up on some of the state’s restrictions amid the coronavirus outbreak, a day after the White House issued new Guidelines for Opening Up America Again.

Walz’s announcement also came after the Commander in Chief called for the state to be liberated.

Staff writer for MinnPost, Peter Callaghan, tweeted that Gov. Tim Walz is easing up some of Minnesota’s outdoor recreational restrictions that include hunting, fishing, shooting ranges, boating, and golfing.

“It’s important for us to stay active and enjoy the outdoors while preventing the spread of COVID-19,” said Gov. Walz. “This measure will allow Minnesotans to take advantage of more opportunities to get outside, while still doing their part to keep their neighbors healthy.”

President Trump on Friday morning, took to Twitter amid the unusual lockdown restrictions in some states, tweeting “LIBERATE MINNESOTA!” and then adding Michigan and Virginia to the list.

The president’s tweet comes a day after the Commander in Chief’s Coronavirus Taskforce put out guidelines that give governors the ability to decide when and how to reopen their state up amid the COVID-19 pandemic. Continued Below

Minnesota will also partner with other midwest states on reopening:

Press release announcing Midwest partnership on reopening economies. Similar to what states on coasts have announced. (Are we acknowledging we're in the Midwest now, Minnesota?) pic.twitter.com/ZY99Ayo6sv

Meanwhile, protesters rallied outside the Minnesota governor’s residence on Friday, to demand that Gov. Tim Walz reopen the state’s economy:

(Related: Gov. Whitmer References ‘Snow On The Ground In Michigan’ While Defending Her ‘Stringent’ Stay-At-Home Order)