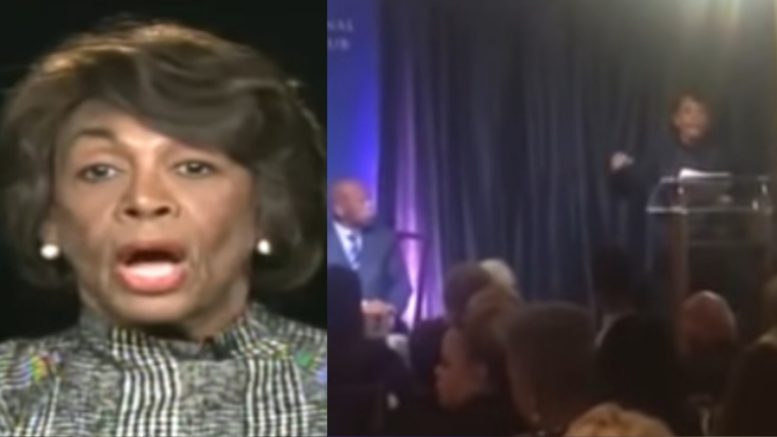 Maxine Waters is not accepting Attorney General William Barr’s summary of the Mueller Report, and is now renewing calls for impeachment of President Trump.

And the reason this time? Waters is convinced that President Trump conspired with Russian oligarchs, despite no evidence of collusion found during Special Counsel Robert Mueller’s two-year investigation.

During her speech at the Woman’s National Democratic Club Dinner, Maxine slammed critics of her multiple calls for impeachment.

In a video captured by one of the attendees, Waters is heard saying, “Some people say, ‘How dare her come out and say, ‘Impeach him? She doesn’t know enough about him to talk about impeaching him.’ But now the American people, whether they say it or not, they know that this man is dangerous.”

She continued, “That certainly, he conspired with the Kremlin and with the oligarchs of Russia. And certainly, he has caused us to lose allies all over the world. And they can’t believe we elected him.”

Maxine then drew cheers from the crowd when she declared, “But guess what? They’re going to believe it when we get rid of him!” Video Below

Waters said that despite getting a letter from William Barr, who summarized Special Counsel Mueller’s report, “We don’t know what’s in the report yet!”

And she said her fellow House members will use subpoena power and whatever else necessary to review the full report.

Maxine added, “While there are still those who think, you know, he’ll never be impeached, you never know.” Video Below

Sebastian Gorka: “Democrats Have Launched A Boomerang & It’s Going To Take Their Own Heads Off”