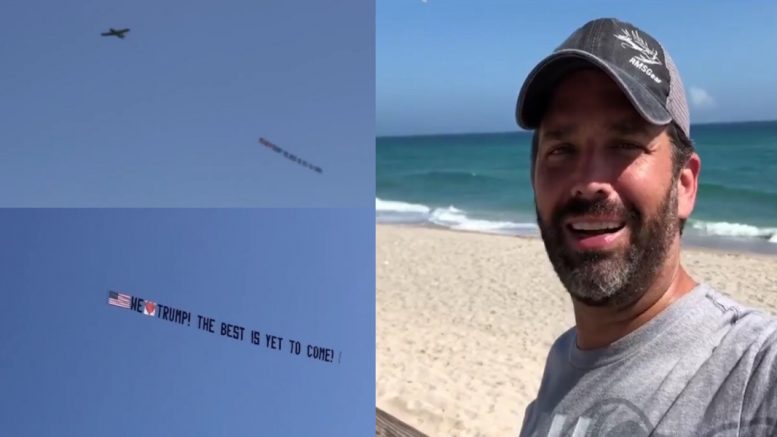 Donald Trump Jr. posted a video on President’s Day, showing that a plane flew by in Mar-a-Lago, Florida with a banner that read “We love Trump! The best is yet to come!”

“Our favorite sky-writer is back. I’m not sure 100% if he’s trolling KG (Kimberly Guilfoyle) on this one, because the new motto is an interesting one, and one that she made rather famous this summer in her RNC speech– check ’em out up there. I think you’ll appreciate this one as much as I did,” Trump Jr. said before showing the banner flying across the sky.

Donald Trump Jr. shows off the the banner in the sky and read aloud, “The best is yet to come!” adding, “The outpouring that we’re seeing is absolutely amazing. Thank you all for that, truly appreciate it.”

(Related: Gorka: 74 Million Americans Are Very Excited For The Speech Trump Is Going To Give Next)

The 45th President surprised supporters, driving slowly past the crowd in a motorcade as they cheered and chanted “USA!”, “We love Trump!”

JUST IN – Trump slowly drives past in motorcade at a spontaneous rally in West Palm Beach, FL on Presidents’ Day.pic.twitter.com/tuRlL1GwnO

Sen. Rogers On ‘Weak-Kneed Republicans’: “The Crenshaws, The Kinzingers, The Mace’s– They All Need To Go!”

Cuomo Says Being Called ‘Fredo’ Is Like Using The N Word, Katrina Pierson & Don Jr. Level Him: ‘Equivocating The Two Is Pure Racism’