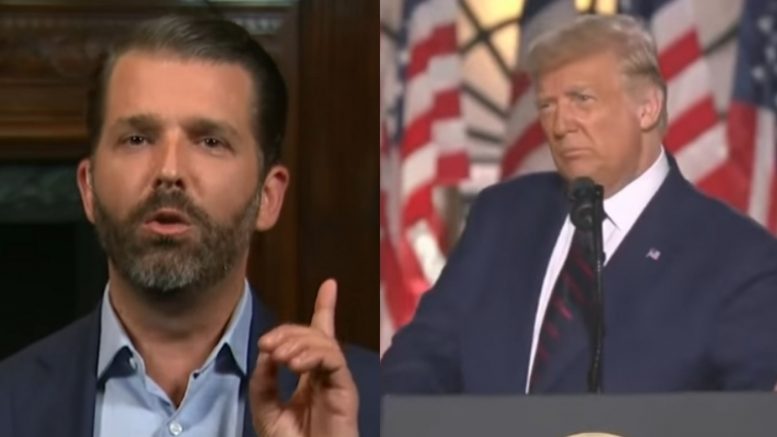 Appearing on Monday’s airing of Hannity, Donald Trump Jr. issued a powerful reaction to his father’s acquittal in the Senate impeachment trial.

He then indicated what to expect out of the 45th President moving forward.

Related Article: Don Jr. Thanks Supporters As A Banner Flies For His Father On President’s Day In Mar-A-Lago

Trump Jr. admonished Democrat House impeachment managers for presenting “manufactured” evidence at the Senate trial and suggested they did so because they knew “patsy media” and weak Republicans would let them get away with it.

He then reminded Americans that traditional Repubblican leaders’ naturally are unwilling to fight back as seen out of many of them during the impeachment trial. “And that’s why this is Donald Trump’s Party,” Trump Jr. declared.

“He’s taught Republicans and conservatives that they don’t need to be steam-rolled, that they can push back, that they don’t just have to roll over and die because the other side would like them to,” he continued. “That’s the difference between Donald Trump and Republican leadership for the last few decades, which has done nothing but cede ground to the radical left.”

Don Jr. went on to give insight on what’s next for President Trump now that the second impeachment trial is behind him.

“And we’re going to continue doing to conservatism what my father has done, which is bring it from the dead back into real life with people who love this country and are willing to go to bat for her,” he concluded. Video Below