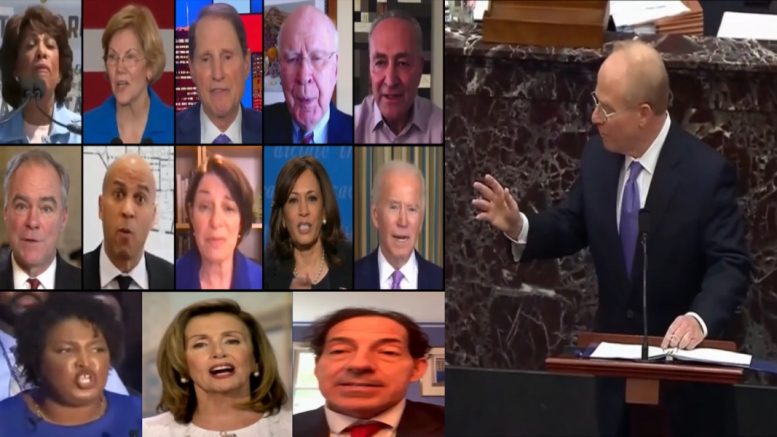 Former President Donald Trump’s lawyer David Schoen defended the 45th president’s choice of wording on Friday during the impeachment trial– by playing a video montage of Democrats who have used the exact same common political rhetoric as Mr. Trump on many occasions in the past.

Democrats allege that the president incited violence at the Capitol in a speech he delivered near the White House on January 6. In his address, Mr. Trump used the words “fight like hell” in reference to his team’s legal efforts around election integrity and primarying lawmakers in upcoming elections. House managers allege that the former president used the words to incite his followers to commit violence.

Once the video finished, Schoen pointed at senators along with the impeachment managers and told them to “stop the hypocrisy.”

(Related: Donald Trump Jr.: “This Is Why They’re Really Trying To Impeach My Father”)

Schoen argued that former president Donald Trump “did not incite the horrific, terrible riots” that were carried out at the U.S. Capitol on January 6. He claimed that House impeachment managers took President Trump’s words out of context and manipulated footage, tweets and news reporting to support their case.

Schoen showed many clips media interviews, rallies, and violent protests from last summer to suggest that Democrats are guilty of the same behavior — including promoting violence seeking to decertify election results — that they accused Republicans of during this impeachment trial. Video Below

Schiff Says The Threat Posed By Soleimani “Does Not Constitute ‘Imminent'”, Cruz Levels Him: “If You Didn’t Hate Trump”, It’d Be Easier To See