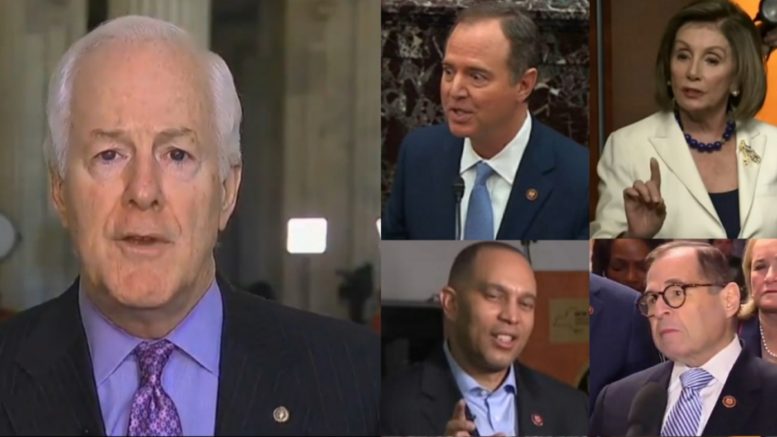 The remarks by Cornyn came as part of his response to Rep. Hakeem Jeffries (D-NY) who claimed on Sunday that Democrats “don’t dislike” President Trump.

“Well, I think personal animus is almost most of it,” Sen. Cornyn said. “It’s clear that from the time the President was inaugurated January 20, 2017, that the impeachment effort was underway.”

He continued, “And then it was the appointment of a special counsel…created the Mueller investigation, which ended up with no charges on collusion or obstruction.”

“This is the next in a series of efforts to reverse the election in 2016. I think it’s almost completely personal animus,” Cornyn asserted. Video Below

Mr. Cornyn then warned, “If we succumb to the temptation to convict and remove a president under these circumstances with this sort of record, then this will become routine. And the next time Republicans have control of the House of Representatives and there’s a Democratic president then there will be an impeachment effort.”

“I think that would be a travesty for our country and certainly undermine the authority of the voters to choose their presidents rather than members of Congress,” he declared. Video Below

Sen. Cornyn: the Democrats’ impeachment undermines “the authority of the voters to choose their presidents”https://t.co/VspUL2sevw pic.twitter.com/MdgmyRij8o