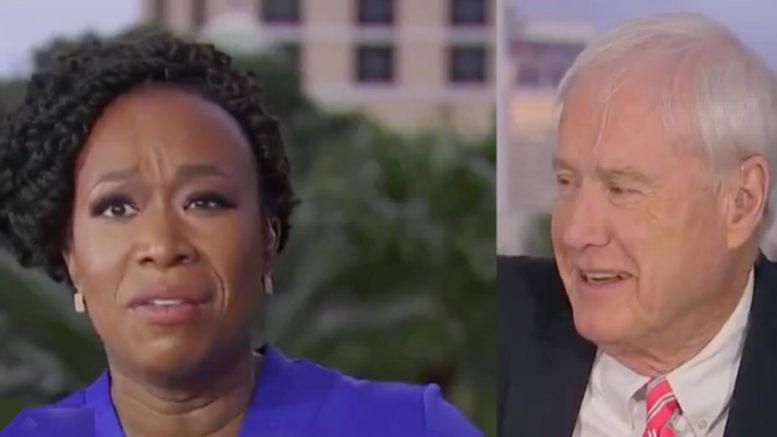 Saturday on MSNBC, Joy Reid claimed white Trump supporters were the “hungriest” in “taking back the country” from “brown people and immigrants” by electing Donald Trump in the 2016 presidential election.

Chris Matthews appeared to agree with Reid by adding to her list of people that she named off.

“On the Republican side, even though Donald Trump did not have a majority, the hungry constituency were white– a lot of white ethnic voters, north and south who said, ‘We’re taking this country back from the brown people, the immigrants'”, Joy Reid claimed.

She went on to say that Trump’s constituents voted for him to get get rid of “unlawful migration”, adding, “We don’t care what you say”, referring to Trump supporters.

Reid continued by alleging that Trump voters also wanted to take the country back from “The smart, the smarty pants’, and the college-educated”.

She also said of the Trump voters who “wanted to take back the country” from the people she had listed: “Forget them, we’re the hungriest,” adding, “The hungriest usually wins”. (Video Below)

According to Pew Research, Trump won white voters by a margin almost identical to that of Mitt Romney, who lost the popular vote to Barack Obama in 2012. White non-Hispanic voters preferred Trump over Clinton by 21 percentage points (58% to 37%), according to the exit poll conducted by Edison Research for the National Election Pool.

Among whites, Trump won an overwhelming share of those without a college degree; and among white college graduates – a group that many identified as key for a potential Clinton victory – Trump outperformed Clinton by a narrow 4-point margin. Trump won whites with a college degree 49% to 45%. Older voters (ages 65 and older) preferred Trump over Clinton 53%-45%, reported Pew Research.

(Related: MSNBC Analyst On The ‘Drop’ Of Iowa Voters’: “The Perfect Example Of Systemic Racism … White Children Are Not In Cages”)