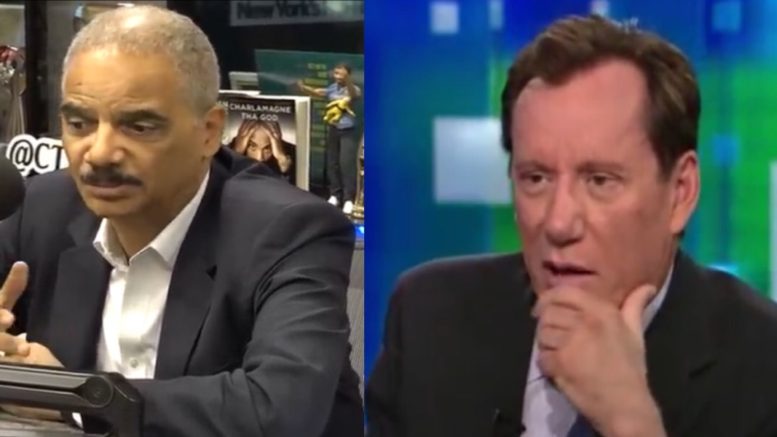 Former Attorney General Eric Holder took to Twitter on Tuesday, suggesting that the Trump administration cannot handle a national security crisis, pertaining to the coronavirus. Holder also included in his post, a picture of former President John F. Kennedy and his brother Robert Kennedy, both of whom were assassinated.

President announced Wednesday that he would be holding a 6 p.m. ET news conference to discuss the coronavirus, which is rapidly spreading around the world and triggering fears of a pandemic.

The president’s announcement follows criticism from many in the media about his administration’s handling of the threat and comments made by Democratic presidential contenders Tuesday night on the South Carolina debate stage to the same effect, reported Fox News.

“Low Ratings Fake News MSDNC (Comcast) & @CNN are doing everything possible to make the Caronavirus [sic] look as bad as possible, including panicking markets, if possible,” President Trump wrote, referencing dives in the U.S. stock market both Monday and Tuesday which were triggered by fears about coronavirus. “Likewise their incompetent Do Nothing Democrat comrades are all talk, no action. USA in great shape!”

“I will be having a News Conference at the White House, on this subject, today at 6:00 P.M. CDC representatives, and others, will be there. Thank you!” the president announced Wednesday morning.

Amid the criticism of the President’s administration handling the threat of the coronavirus, former Eric Holder suggested the Trump administration does not have “the intellectual capacity to navigate the nation through it.” Actor James Woods responded to Holder, encouraging the former attorney general to “volunteer”. (Continued Below)

Eric Holder wrote on Twitter Tuesday: “Does anyone think that if there were a consequential national security/economic crisis that this Administration has the intellectual capacity and policy acumen to navigate the nation through it?”

“The answer, frighteningly, is no. Now we have the coronavirus and they have no idea,” Holder claimed.

James Woods responded Wednesday morning: “Maybe you could volunteer. Get your old team that mastered gun-running to the Mexican cartels. That worked out so well. #EricHolderFastAndFurious”. (Continued Below)

Maybe you could volunteer. Get your old team that mastered gun-running to the Mexican cartels. That worked out so well. #EricHolderFastAndFurious https://t.co/688TEX6f7r

Woods followed up by tweeting a “reminder of Eric Holder’s only legacy”:

Oh, a reminder of Eric Holder’s only legacy: the death of Border Patrol Agent #BrianTerry, in reference to the previous tweet. https://t.co/6Z82nmhlWz

In recent days Trump, who spent Monday and Tuesday on a state visit in India, has sought to reassure Americans, online and in press conferences, that the virus is not a major threat. He’s specifically cited the fact that there has been no “community spread” of coronavirus within American borders, according to the Centers for Disease Control, as per Fox News.

In another tweet that came Wednesday morning, Trump again congratulated his administration for how it is handling the disease that has infected one American soldier in South Korea, according to a Tuesday night announcement, and the CDC has warned will inevitably begin circulating within U.S. borders, Fox News reported.