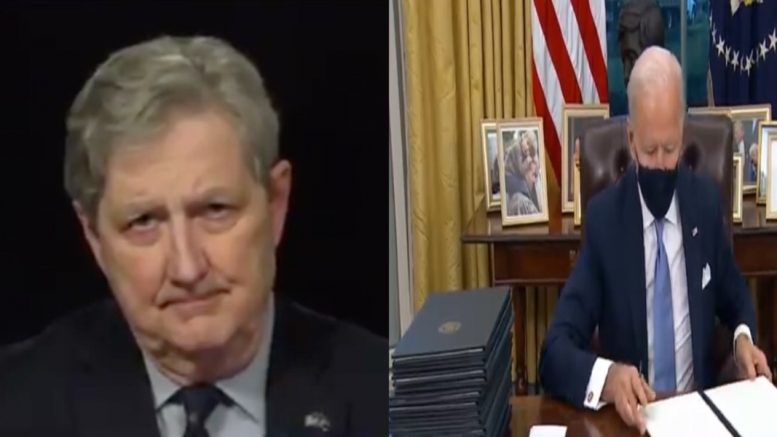 Senator John Kennedy (R-LA) believes Joe Biden’s “war on oil and gas is immeasurably foolish” as the current occupant in the White House’s Executive Orders related to the industrial energy sector will be detrimental to both the nation and his home state.

“Let me say a word about President Biden’s Executive Orders on oil and gas: they are immeasurably foolish. They are going to gut Louisiana like a fish. One-third of my state’s GDP is related to oil and gas. And our state is not alone. His war on oil and gas is going to hurt America. It is going to destroy our energy independence,” Senator Kennedy told Trey Gowdy of Biden’s green energy orders.

“Here is President Biden’s new energy policy: ‘We are not going to produce our own oil. Instead, we are going to buy oil from countries that hate us so they’ll have more money to buy weapons to try to kill us.’ It’s immeasurably foolish,” he reiterated.

“Most Americans support an all-of-the-above energy policy: Oil, gas, wind, solar, nuclear, geothermal, hydrogen. But they also understand that we can’t run the greatest economy in all of human history without oil and gas. Not now, and probably for a long time. I don’t know about you Trey, but my car doesn’t run on fairy dust. My car doesn’t run off unicorn urine,” Senator Kennedy sarcastically expressed.

The Louisiana Senator also remarked that Biden has “given in to the left wing crazies”, adding that Biden and the Democrats have turned green energy and “climate change” into a religion and that the current occupant in the White House appears to be “sucking it up like a Hoover Deluxe.” Video Below

Let’s don’t produce our own oil.

Let’s buy our oil from countries who hate us so they’ll have $ to buy weapons to try to kill us. pic.twitter.com/sKXXffIpyy

(Related: Senator Kennedy On Joe Biden: “He’s A Proponent Of The ‘I Deserve, You Owe Me’ Mentality”)