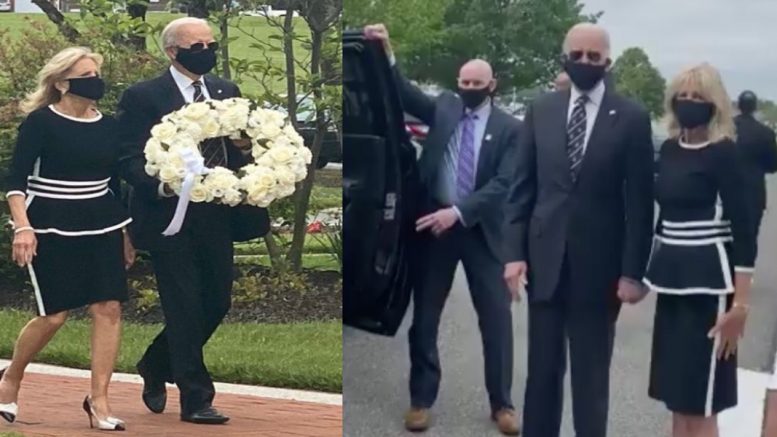 On Monday, presumptive Democratic nominee Joe Biden emerged from his basement to make his public appearance, in over two months, near his Delaware residence for Memorial Day.

Biden and his wife Jill were seen laying a wreath at a veterans park, and both were wearing black masks.

Since the Chinese coronavirus began, Biden has swapped live campaign stops for virtual events from his Wilmington home, with the shift yielding a series of awkward moments for the gaffe-prone candidate, Breitbart reported.

Joe Biden has left his house for the first time in two months for a Memorial Day visit to the Delaware Memorial Bridge Veterans Memorial Park and lay a wreath. pic.twitter.com/34D4Gd0YcC

Joe Biden and his wife Jill lay a wreath at Veterans Memorial in Delaware:

Joe and Jill Biden lay a wreath at a veterans memorial in Delaware.#MemorialDay2020 pic.twitter.com/Tc0fEJ66An

Biden had told reporters before he left: “Never forget the sacrifices that these men and women made. Never, ever, ever forget. … It feels good to be out of my house.”

Biden says his message to the country on Memorial Day is “Never forget the sacrifices that these men and women made. Never, ever, ever forget.” Asked about leaving home for the first time in two months, he says, “It feels good to be out of my house.” pic.twitter.com/BpXABWKTOt

Earlier on Monday, President Trump, Vice President Mike Pence, and Defense Secretary Mark Esper participated in a wreath-laying ceremony at the Tomb of the Unknown Soldier at Arlington National Cemetery.

PA Lawmakers: These Numbers Just Don’t Add Up & Certification Of PA’s Results Was In Error