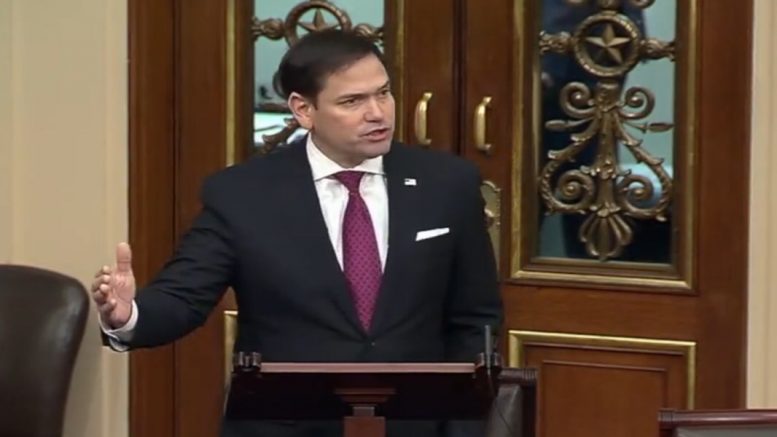 Senator Marco Rubio (R-FL) spoke out Wednesday against the stated Democratic desire to change the rules of the Senate to pass their federal voting rights legislation.

He also pushed back at Democrats and the mainstream media’s narrative that the government was almost overthrown on January 6, 2021 “by a guy wearing a Viking hat and speedos”.

“Last week, the vice president of the United States told us that a riot that happened here in the U.S. Capitol last year was the equivalent of the day in which Japan attacked us at Pearl Harbor and the U.S. was pulled into a world war that took the lives of over 3% of the world’s population,” Sen. Rubio said.

“And yesterday, we were treated to the president telling us that election laws that are being passed by various states across the country over the last year are basically the same, the equivalent of the segregation that existed in this country in the 1950s and 1960s, and before,” he continued.

“Now look, if your daily routine is to wake up in the morning and turn on MSNBC as you ride your peloton and you go on Twitter as you’re drinking your caramel macchiato and reading The New York Times as you eat your avocado toast, this makes perfect sense to you,” the Florida GOP senator said.

“They believe this ridiculous narrative that every Republican is a insurrectionist, probably a racist, wants to overthrow the U.S. government and destroy democracy,” he expressed. Video Below

“I don’t care how many candlelight vigils and musical performances you have from the cast of Hamilton, you’re not going to convince most normal and sane people that our government last year was almost overthrown by a guy wearing a Viking hat and speedos,” Sen. Rubio said.

Lake Reacts to Cheney Vowing to Campaign Against her With Dems: ‘Turns Out, she Really is a Democrat After All’