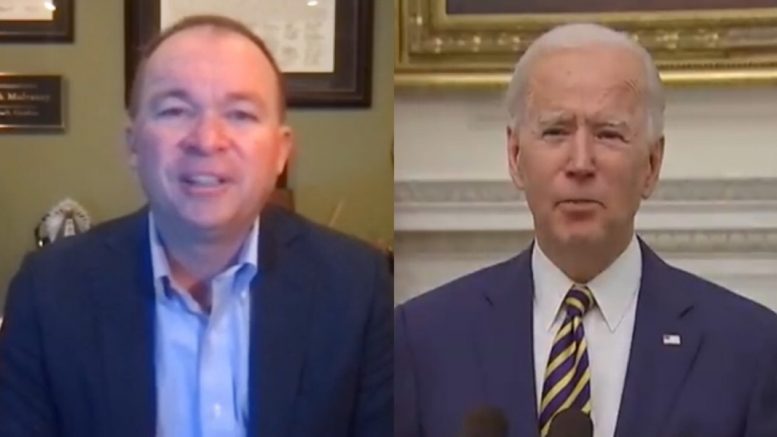 Former acting White House chief of staff Mick Mulvaney believes Joe Biden is an “extraordinarily weak leader” who does not have the political capital to achieve a bipartisan coronavirus stimulus bill.

“Bipartisanship is much more difficult that people realize. It takes strong leadership, especially from the majority party,” Mulvaney said on Fox Business’ “Mornings With Maria”, adding that former Presidents Ronald Reagan and Bill Clinton were successful because they could get members of their own parties to do what they did not want to do.

“Joe Biden is an extraordinary weak leader. What people don’t talk about nearly enough is that nobody really voted for Joe Biden,” Mick Mulvaney suspected. “They voted against Donald Trump.”

“Biden comes in without a lot of political capital within his own party. So while his own personality may lead you to think he wants to be bipartisan and cut deals, but he doesn’t have the power to get his party to do that. So it’s going to be very, very difficult I think to hammer out a bipartisan stimulus bill, which I think you’re going to see the Democrats trying to force something through by themselves,” he said of Democrats’ $1.9 trillion COVID-19 relief plan.

Biden met with Republican senators at the White House Monday and appears ready to push forward with his $1.9 trillion relief plan, which is not expected to draw support from Republicans, who favor a plan that is about one-third the size of Biden’s, Newmax reported.

Biden told the group of Republican Senators “that he will not slow down work on this urgent crisis response, and will not settle for a package that fails to meet the moment,” according to White House press secretary Jen Psaki. Video Below

(Related: Sen. Kennedy On Biden’s ‘Immeasurably Foolish’ EO’s: “They Are Going To Gut Louisiana Like A Fish”