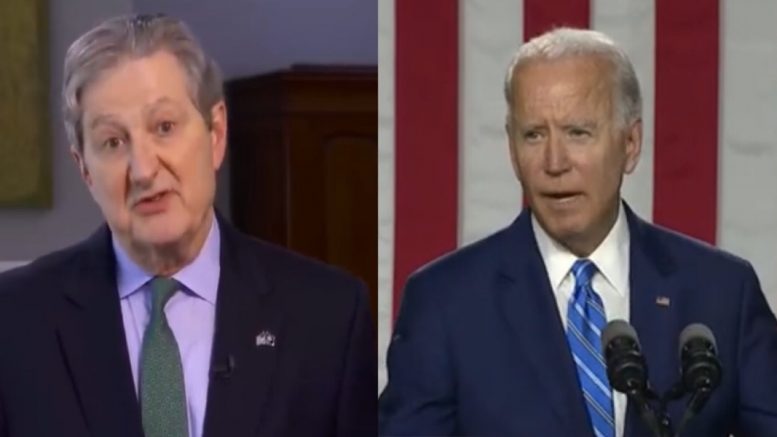 “He’s a proponent of the ‘I deserve, you owe me’ mentality,” the Louisiana Senator said. “I’m not, I believe in freewill and responsibility.”

Senator Kennedy went on to say that Joe Biden “thinks he can tax-spend and regulate America into prosperity”, adding, “I don’t.”

“I believe in more freedom. He believes in more free stuff. I think the vice president, or at least the people who are going to run the show, think abortion is a moral good; I don’t,” he continued.

“I think that the vice president thinks that the way you handle China and Russia and Iran and North Korea is give them a big olé hug and a cup of cocoa. I don’t. I think you have to be firm, because weakness invites the wolves. It’s just a fundamental difference,” Senator Kennedy said.

“And if the America people are asked … and they understand what he stands for, I think they’ll see that the vice president, for whatever reason, took a hard left and kept driving,” he added. Continued Below

“Biden has gone radical left,” President Donald Trump said in the Rose Garden Tuesday. “There’s never been a time when two candidates were so different.”

The president’s comments came after Biden released a $2 trillion plan on Tuesday to boost investment in clean energy and stop all climate-damaging emissions from U.S. power plants by 2035.

The proposal was unveiled following the release of recommendations from a joint task force set up by Biden and populist Sen. Bernie Sanders of Vermont, who was his last remaining rival in the primary race before ending his campaign. Progressive freshman Rep. Alexandria Ocasio-Cortez of New York co-chaired the Biden-Sanders task force on climate change, Fox News reported. Video Below

(Related: Kennedy To Those Who Are ‘Using Kids As Political Pawns’ To Keep Schools Closed: “Kiss My A**”)

Ted Cruz: Biden Is A ‘Crazy, Lunatic Leftist’ Who Is ‘Setting Us Up to Have a Very Good Election in 2022’