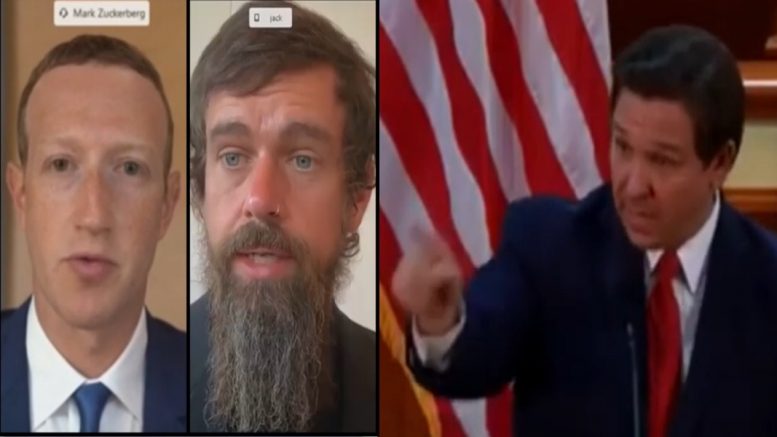 Florida Governor Ron DeSantis on Tuesday lashed out on big tech censorship and the media while while questions from reporters during a press conference at the Florida State Capitol.

Before taking questions though, the Florida governor gave a 45-minute speech, identifying Big Tech companies as the leading threat to American democracy and freedom of expression today and pledged that Florida Republicans would take action.

List Of The New Regulations @GovRonDeSantis Is Proposing To Deal With Big Tech 9/https://t.co/bcUb4XJrqO pic.twitter.com/54MQpVG2Lh

Responding to a reporter during the press conference over Big Tech’s censorship, Governor DeSantis said, “I think it’s been done in a way completely unprincipled. They mentioned the Hunter Biden. [The] Hunter Biden story was true. Okay? We now know it was true. And the typical corporate media outlets, they just chose to ignore it. Obviously, they wanted to beat Trump.”

“They had a view on the election. They didn’t want to give it any air. So we rely on social media to go around that, not let corporate legacy media outlets control the discourse and let us speak. So you had The New York Post to run it, and you couldn’t get any traction, you couldn’t get any reach on it, because Big Tech put their thumb on the scale. So that was true. What they said at the time was, ‘Oh, it’s a conspiracy, or it’s based on hacked information’. Are you kidding me?” he asked of the censored October 2020 story.

“You’re trying to tell me if there was hacked information that could damage me, you guys wouldn’t print it? Gimme a break. You can whiz on my leg, but don’t tell me it’s raining. You guys would print it every single day if you could. And Big Tech would allow it to proliferate every single day, 24/7,” Governor DeSantis expressed. Video Below

“It’s not being done in a principled basis. … They haven’t done a good job in it. The thumb is always on the scale in one direction, and we just need to bring some protection for folks. … If [a small business owner] engages in wrong-think or go to the wrong political event, then all of a sudden [Big Tech] can act in concert and take ya off [social media]? You need to have protection against that,” Governor DeSantis explained.

.@GovRonDeSantis Calling Out Journalists Defending Big Tech & The Censorship Of Hunter Biden Story: “You’re trying to tell me if there was hacked information that could damage me, you wouldn’t print it? Give me a break. You can whiz on my leg, but don’t tell me it’s raining.” 5/ pic.twitter.com/6psMF0UJ0e

Pat Sajack Releases a Statement After Contestants Endure ‘Online Ridicule’: ‘It’s Okay to Laugh at the Situation–but Have a Little Heart’