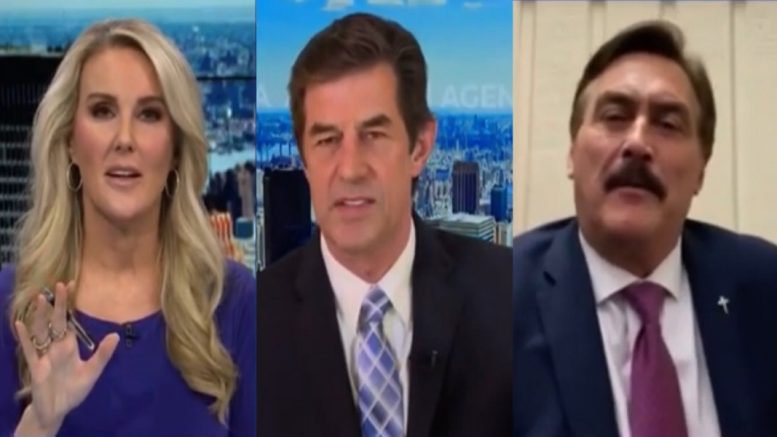 Speaking to anchor Bob Sellers on Tuesday to give his side of the story over why Twitter censored him, Lindell was then censored on Newsmax when he claimed to have evidence of election malfeasance from the November presidential election.

Asked what happened what his Twitter account and the MyPillow company page, Mike Lindell began to respond before being cut off by Bob Sellers, “Well first, my was taken down because we have all the election fraud with these Dominion machines. We have 100% proof. And then when they took it down a couple weeks ago and put it back up– my personal …”.

Sellers interjected to tell Lindell, “You’re talking about machines. We at Newsmax have not been able to verify and of those kinds of allegations. We just want to let people know that there’s nothing substantive that we’ve seen.”

The Newsmax anchor continued while speaking over Lindell: “While there were some clear evidence of some cases of vote fraud and election irregularities, the election results in every state were certified, and Newsmax accepts the results as legal and final. The courts have also supported that view.”

While Sellers was reading from a Newsmax statement, the MyPillow CEO accused the network of having “suppressed” him in the same fashion as Twitter. Sellers tried to divert the conversation to a discussion over “canceling culture” and asked Lindell about whether he hoped his Twitter ban would be temporary rather than permanent. Continued Below

“I want it to be a permanent [ban], because you know what? They did this because I’m revealing all the evidence on Friday of all the election fraud of these machines. So I’m sorry if you think it’s not real. It’s real,” Lindell told Sellers.

When Lindell tried to continue, Sellers once again cut him off and asked his producers to end the segment.

“Can I ask our producers, can we get out of here please?” Sellers asked. “I don’t want to have to keep going over this.” Sellers then got up from his seat and appeared to dramatically storm off the set when the Newsmax anchor’s colleague, Heather Childers, tried to calm the situation. Video Below

Mike Lindell, last month, dared Dominion Voting Systems to take legal action against him after the company threatened to sue him over claims that their technology rigged the 2020 election in favor of Joe Biden, as previously reported by The Freedom Times.

A cease and desist letter from Dominion that was written on December 23rd warns Lindell that “litigation” is “imminent” if he does not stop his role in “the ongoing misinformation campaign.”

In response, Lindell urged the voting machine company: “Please sue me. … Those machines are set to rig elections. If Dominion wants to sue me, I welcome it,” he said.

**UPDATE** Mike Lindell will be on Newsmax with Rob Schmitt at 9ET.