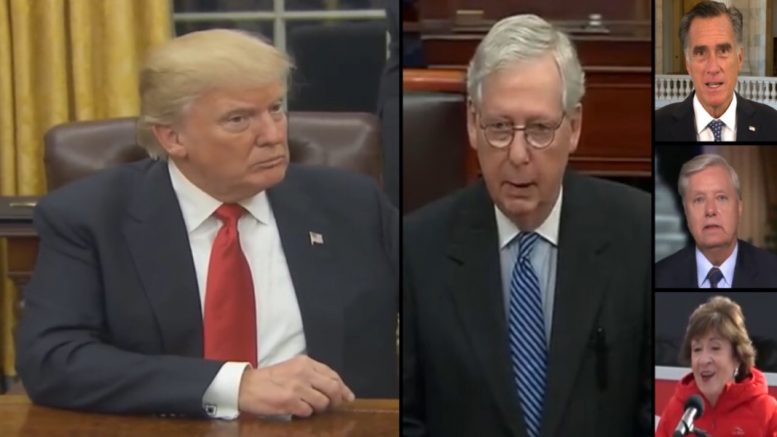 President Donald Trump unleashed a series of tweets Saturday afternoon against Washington’s establishment, from the courts to the FBI, while also urging Republican Senators to “step up and fight” the presidential election results amid alleged voter fraud, occurring during the November election.

“Time for Republican Senators to step up and fight for the Presidency, like the Democrats would do if they had actually won,” the Commander in Chief encouraged.

President Trump said the “proof is irrefutable” and listed a litany of wrongdoing.

“The proof is irrefutable! Massive late night mail-in ballot drops in swing states, stuffing the ballot boxes (on video), double voters, dead voters, fake signatures, illegal immigrant voters, banned Republican vote watchers, MORE VOTES THAN ACTUAL VOTERS (check out Detroit & Philadelphia), and much more,” he explained. “The numbers are far greater than what is necessary to win the individual swing states, and cannot even be contested.”

The president also faulted several establishments for failing to “do their job”, writing, “Courts are bad, the FBI and ‘Justice’ didn’t do their job, and the United States Election System looks like that of a third world country. Freedom of the press has been gone for a long time, it is Fake News, and now we have Big Tech (with Section 230) to deal with.”

“But when it is all over, and this period of time becomes just another ugly chapter in our Country’s history, WE WILL WIN!!!” he declared. Continued Below

On Christmas eve, the president noted that he “saved at least 8 Republican Senators”, along with Mitch McConnell (R-KY) during the 2020 election, adding, “Now they (almost all) sit back and watch me fight against a crooked and vicious foe, the Radical Left Democrats. I will NEVER FORGET!”

President Trump also on Saturday, wrote of the election: “Mitch & the Republicans do NOTHING, just want to let it pass. NO FIGHT!”

Trump pointed out that the “Justice” Department and the FBI “have done nothing” regarding the “voter fraud”, but told supporters, “History will remember. Never give up. See everyone in D.C. on January 6th.”

He also wondered, “Where the hell is the Durham Report?”

The president called out the U.S. Supreme Court for being “totally incompetent and weak on the massive Election Fraud that took place in the 2020 Presidential Election.”

Earlier this week, the Commander in Chief released a video message in the wake of the November election, explaining why he is “so determined to pursue every legal Constitutional option available to stop the theft of the presidential election”.

(Related: VP Pence: “As Our Election Contest Continues, I’ll Make You A Promise: We’re Gonna Keep Fighting Until Every Legal Vote Is Counted & Every Illegal Vote Is Thrown Out”)