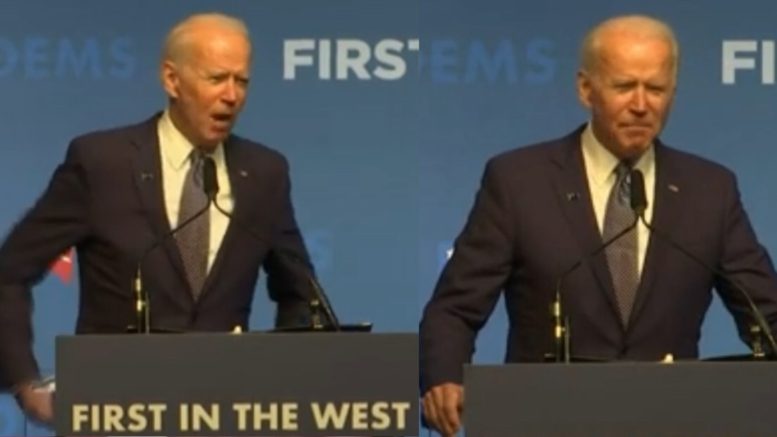 More than a dozen Democratic presidential hopefuls made their pitches to the Silver State on Sunday at the Nevada Democratic Party’s First in the West fundraising dinner, according to Las Vegas Review Journal.

Former Vice President Joe Biden was the first candidate to speak and stuck tightly to his major campaign talking points: his record of “getting things done” and the claim he could beat President Donald Trump, whom he accused of risking his presidency by “trying to bribe foreign leaders” into lying about Biden, wrote the Journal.

During his speech, Joe Biden claimed “I could beat Trump! I can beat him.”

“But you don’t have to take my word for it,” Biden continued. “Over the last couple weeks, we learned a couple things: Vladimir Putin doesn’t want me to be president, Trump’s good friend. Kim Jung Un, from North Korea, says, ‘I’m a rabid dog that needs to be beaten with a stick to death.’ Well, I tell you what, I count that as a badge of courage.”

He went on to claim, “Donald Trump knows that I’ll beat him; that’s why he’s spending millions of dollars on air, lying about me, and risking his very, very presidency by trying to bribe foreign leaders to say things about me that aren’t true and they won’t say. He has his henchman from Rudy Guiliani to the NRA, raising millions of dollars, telling lies about me on the air. When’s the last time you’ve seen a sitting president spend millions of dollars to try to determine who the Democratic nominee is?”

Friday during the Democratic-led House impeachment inquiry, Rep. Elise Stefanik (R-NY) questioned Marie Yovanovitch, the former U.S. ambassador to Ukraine Friday, on the role of former vice president Joe Biden’s son Hunter’s position on the board of Burisma, a Ukrainian natural gas company. Yovanovitch admitted the Obama-Biden admin prepped her on Hunter Biden for her Senate hearing confirmation. (Continued Below)

“I know this is before you arrived in Ukraine, but you are aware that the first case that the U.S., U.K., and Ukraine investigators worked on was, in fact, the owner of Burisma? And that was during the Obama administration?” Stefanik asked, to which Yovanovitch answered, “Yes.”

“But let’s take the step back. The first time you personally became aware of Burisma was actually when you were being prepared by the Obama State Department for your Senate confirmation hearings. And this was in the form of practice questions and answers. This was your deposition and you testified in this particular practice ‘Q & A’ with the Obama State Department, it wasn’t just generally about Burisma and corruption, it was specifically about Hunter Biden and Burisma. Is that correct?” Stefanik asked, to which Yovanovitch answered, “Yes, it is.” (Video Below)

“And the exact quote from your testimony, Ambassador is: ‘The way the question was phrased in this model ‘Q & A’ was what can you tell us about Hunter Bidens… you know being named to the board of Burisma.’ So for the millions of Americans watching, President Obama’s own State Department was so concerned about potential ‘conflict of interest from Hunter Biden’s role at Burisma’ that they raised it themselves while prepping this wonderful Ambassador nominee before her confirmation. And yet, our Democratic colleagues and the Chairman of this committee, cry foul when we dare ask that same question that the Obama State Department was so concerned about. But we will continue asking it,” Stefanik said. [Emphasized].

Yovanovitch admits the Obama-Biden admin prepped her on Hunter Biden for her Senate hearing confirmation:

(Related: Alleged Whistleblower Reportedly Was A Biden Guest At State Dept Banquet, Don Jr. Reacts: “I’m So Shocked! Said No One Ever!”)