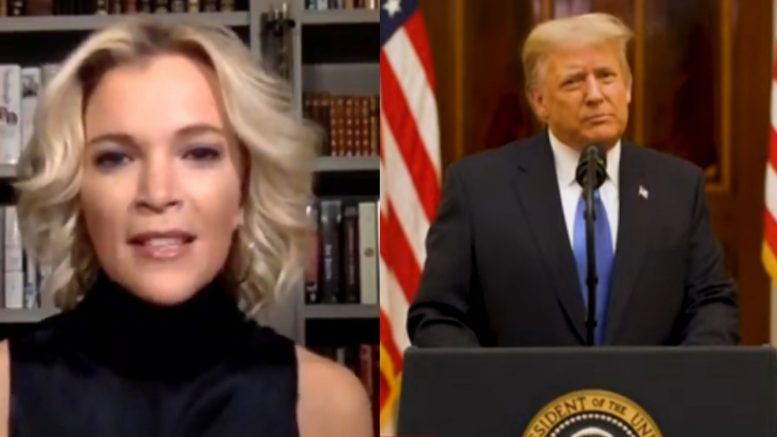 While appearing on Good Morning Britain, Megyn Kelly reflected on key aspects of President Trump’s term in office that resulted in many Republicans’ unwavering support for him over the past four years.

According to Megyn, Republicans were able to look past Trump’s flaws because of what he was able to do “on paper” and his ability to teach GOP politicians “how to fight.” And she thinks that Republicans consider Trump’s presidency to be an overall victory in the end.

“But in the end, they like him on paper. They like the policies he pushed and they certainly like…The biggest thing Trump did — and it’s ironic if you think about the way things went down two weeks ago — is that he taught Republicans how to fight, to stand up to Democrats who were trying to shame them out of doing this or shame them into doing this and calling them all sorts of names just for hraving more conservative views, and to just sort of take it and fight through it. And…for example, put Brett Kavanaugh on the Supreme Court which is something conservatives love — they got three Supreme Court Justices and so on.

“So on paper, I think most Republicans consider his presidency a win.

But the thing that…you know — I don’t wanna say brought him down cause he lost the election in November — but the thing that tarnished his legacy more than ever was his temperament.” Video Below

'He taught Republicans how to fight.'

Journalist @megynkelly explains why Republicans like Donald Trump and that on paper 'most Republicans consider his presidency a win.'

But she says Trump's temperament has 'tarnished his legacy.'@piersmorgan | @susannareid100 pic.twitter.com/gTnbw9v3ba