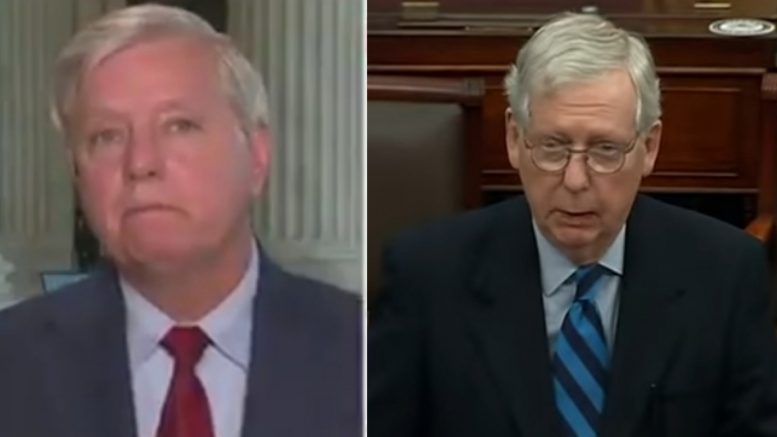 “It’s a political exercise that will further divide the country and, I think, eventually destroy the presidency,” Senator Lindsey Graham said in regards to efforts to convict President Donald Trump on one article of impeachment in the Senate.

Sen. Graham was weighing in on recent remarks made by Senate Republican Leader Mitch McConnell, who has signaled reluctance to vote against impeaching President Trump.

This week, Sen. McConnell accused President Trump of provoking violence at the Capitol building on January 6, which is the basis for why the House voted to impeach Trump last week.

“The mob was fed lies,” McConnell said in a speech that he delivered on the Senate floor. “They were provoked by the President and other powerful people.”

In response, Sen. Lindsey Graham warned McConnell that his rhetoric is “giving some legitimacy” to the Democrat-led impeachment process that took less than 24 hours before successfully getting voted through by the House.

“What I would say to Senator McConnell, that I think he has been a good leader. He’s a great street fighter. I think he’ll be a challenge for Schumer. But he is, in my view, giving some legitimacy to this impeachment process that I think is wrong,” Sen. Graham told Fox News hosts Martha MacCallum and Bret Baier on Wednesday.

“They impeached the President in the House in 24 hours without a lawyer and without one witness. Now, is that what we’re going to become as a country?” he questioned. “I hope not.”

"But he is in my view giving some legitimacy to this impeachment process that I think is wrong," @LindseyGrahamSC said of @senatemajldr. pic.twitter.com/TBMb7xWji8