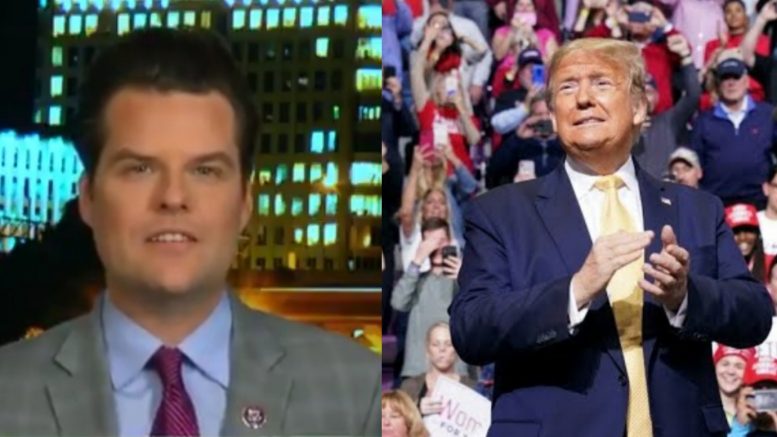 Rep. Matt Gaetz thinks that the legacy of President Donald Trump will only get better with time and that if he has the urge to run again in 2024, the nomination for President will be “handed to him on a silver platter.”

The congressman from Florida gave the assessment while weighing in on Sunday’s airing of The Next Revolution.

“If Donald Trump wants the Republican nomination in 2024, it will be handed to him on a silver platter,” Rep. Gaetz said.

“I’ll support him and I think the field will be mostly clear, but for people that have some ambition that outsizes their political sense. Because with our base, with Trump voters, I think the President is strong as he’s ever been because people see the hypocrisy — they see the headwinds he faced. And I think over time, he’s only going to be be proved more right,” he added.

“Remember, the lens of the left told us that Trump was a Russian agent, and now we see Putin getting crushed as a consequence of what the President did to make our country energy dominant,” Gaetz pointed out. “They said he was shaking down Ukraine, but each and every day we learn more and more about the Bidens improper dealings with the Ukraine.”

“So, I think the legacy of Donald Trump will get better with age, just like a fine wine,” he declared. Video Below

The legacy of President Trump will get better with age, just like a fine wine. pic.twitter.com/XSC8DTP30G

In ending, here is one more clip from Sunday’s program where Rep. Gaetz calls on Americans to “free ourselves from the shackles” of corporate interests.

.@RepMattGaetz calls for the Republican party to "free ourselves from the shackles" of corporate interests: "There are plenty of great Americans who want to contribute to patriotic causes and enthusiastic candidates…"#NextRevFNC pic.twitter.com/zi1vZ7EFqi