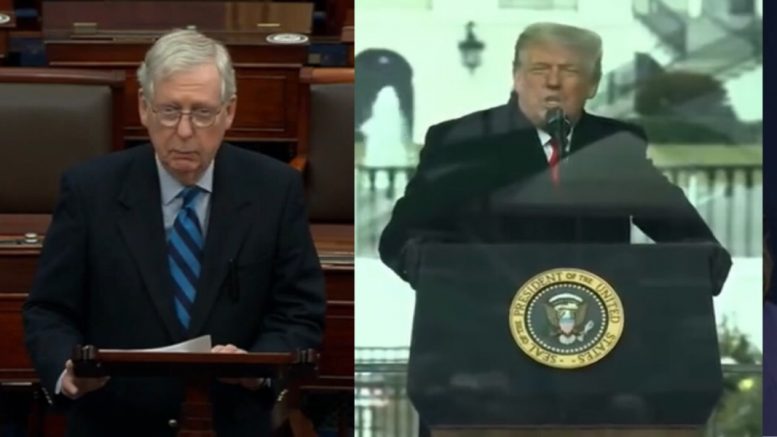 Senate Majority Leader Mitch McConnell (R-KY) on Tuesday, implied that President Donald Trump and others “provoked” the violent mob at the U.S. Capitol on January 6.

“The mob was fed lies. They were provoked by the president and other powerful people,” Senator McConnell said on the Senate floor. “And they tried to use fear and violence to stop a specific proceeding of the first branch of the federal government, which they did not like.”

[email protected] on the U.S. Capitol Attack: "The mob was fed lies. They were provoked by the president and other powerful people." pic.twitter.com/QIeviyHkl3

The House voted to impeach President Donald Trump on alleged charges of “incitement of insurrection” on January 13, one week after the attack on the Capitol. The vote was bipartisan, with 10 Republicans joining all Democrats in impeaching the president.

Sixty-seven votes are needed in the Senate to convict Mr. Trump, and it is unclear whether so many Republicans would join their Democratic colleagues on this issue. Several Republicans have suggested that impeaching Mr. Trump after he leaves office is unconstitutional. McConnell said last week that he had not decided whether he would vote to convict Mr. Trump, CBS News reported.

If Mr. Trump is convicted, then Congress will be able to vote on whether to bar him from ever seeking elected office again. The House has yet to send the article of impeachment to the Senate, a necessary step before the Senate can hold a trial, per CBS News. Continued Below

Trump Supporters will never quit on President Trump. Democrats will try to "cancel" us!! Will not work!!! 75 millions Trump's supporters stand with the President. Do you hear me Mitch McConnell, Liz Cheney, Adam Kinzinger and Alyssa Farah

‘It was all a Lie…There will be Accountability’: Gen. Flynn on ‘Criminals Involved in Dangerously Hurting our Country’