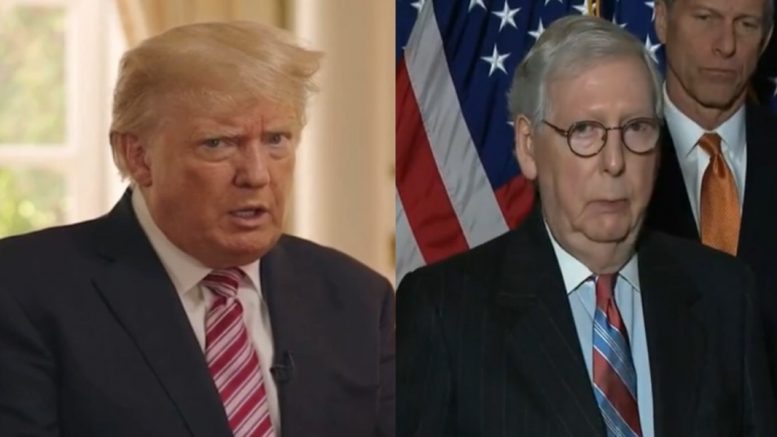 Trump’s latest remarks came a day after McConnell pushed back against the RNC’s censure of Cheney and Kinzinger for their roles on the select committee, saying in part, “We saw it happen. It was a violent insurrection for the purpose of trying to prevent the peaceful transfer of power after a legitimately certified election, from one administration to the next. That’s what it was.”

45th President Donald Trump responded in an email statement from his “Save America” PAC following McConnell’s criticism of the RNC’s censure resolution.

“Mitch McConnell does not speak for the Republican Party, and does not represent the views of the vast majority of its voters. He did nothing to fight for his constituents and stop the most fraudulent election in American history,” Trump said, as more evidence of voter irregularities surface from the 2020 election.

“And he does nothing to stop the lawless Biden Administration, the invasion of our Borders, rising Inflation, Unconstitutional mandates, the persecution of political opponents, fact finding on the incompentent (sic) Afghanistan withdrawal, the giving away our energy independence, etc., which is all because of the fraudulent election. Instead, he bails out the Radical Left and the RINOs,” he said.

“If Mitch would have fought for the election, like the Democrats would have if in the same position, we would not be discussing any of the above today, and our Country would be STRONG and PROUD instead of weak and embarrassed,” Trump added.

"Mitch McConnell does not speak for the Republican Party, and does not represent the views of the vast majority of its voters. He did nothing to fight for his constituents and stop the most fraudulent election in American history. And he does… pic.twitter.com/FiCzWWkm7I

Most recently, Arizona State Representative Mark Finchem (R) introduced a resolution to “set aside and decertify three 2020 county elections” in Arizona, according to a Monday press release.

The 9-page resolution states in part: “Whereas, a declaration of the results of statewide electoral contests in the 2020 general election is in dispute with probable cause to believe that multiple discrepancies exist, both criminal and noncriminal in nature, and that so many questionable ballots were commingled with legitimate ballots across the State of Arizona that significant voter disenfranchisement has occurred, making the election irredeemably compromised”.

The resolution lists a trove of voter irregularities, which were reportedly found during the 2021 Arizona Senate forensic audit. You can read more about Rep. Finchem’s resolution HERE.

Related: ‘Having The Courage To Do The Right Thing!’: Trump Declares Of PA Court Who Ruled Expansive Mail-In Voting Law Unconstitutional)