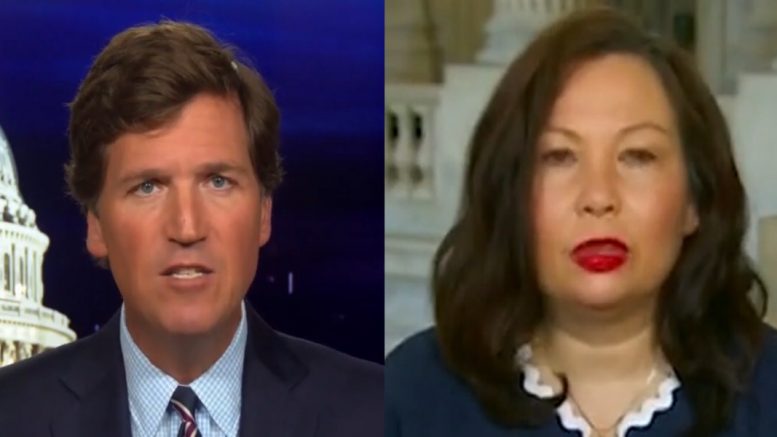 Democrat Senator Tammy Duckworth (IL) spoke with host Dana Bash on Sunday during CNN’s “State of the Union”, saying she is open to listening to arguments for removing statues of founding fathers George Washington and Thomas Jefferson.

When asked by host Dana Bash, “Should statues, for example, of George Washington come down?”

Tucker Carlson responded on his show Monday evening, saying, “You’re not supposed to criticize Tammy Duckworth in any way because she once served in the military. Most people just ignore her. But when Duckworth does speak in public, you’re reminded what a deeply silly and unimpressive person she is.”

He continued: “A national dialogue. Please. They’re not looking for any kid of colloquy. What they want is a soliloquy. We speak, you shut up and listen.” Continued Below

“So what to make of all of this? Well it’s long been considered out of bounds to question a person’s patriotism,” Carlson said. “It’s a very strong charge, and we try not ever to make it. But in the face of all of this, the conclusion can’t be avoided. These people actually hate America. There’s no longer a question about that.”

“And yet paradoxically, at the same time, they desperately want to control America more than anything,” he added. “And that leads to the most basic of all questions: Can you really lead a country that you hate? Ask yourself: what kind of parent would you be if you hated your children?”

Duckworth, who is on a shortlist to be vetted for Joe Biden’s running mate, responded on Twitter Monday to Carlson’s remarks, asking, “Does @TuckerCarlson want to walk a mile in my legs and then tell me whether or not I love America?” Video Below

Duckworth, who lost both of her legs in the Iraq War, is a junior senator from Illinois, CBS News reported.

Does @TuckerCarlson want to walk a mile in my legs and then tell me whether or not I love America?

We leave you with a few highly engaged responses to Senator Duckworth:

Nor did you have issues w these three marveled Mt Rushmore

You are nullifying your own service to this country by entertaining the removal of the country’s founding & its history. There are soldiers in war that end up as traitors & join the other side. If your allegiance is now to the Marxists burning America, you are now a traitor.

So does that mean you now think tearing down statues of George Washington, Mount Rushmore and erasing our history is a ridiculous conversation not worth having? Be honest, do you think that Mount Rushmore is a symbol of White Supremacy?

Why would you love a country founded by dead traitors?

My husband is a decorated war hero from Vietnam who was shot in the back and survived. So what’s your point @SenDuckworth? You don’t get to speak out of both sides of your mouth to please your Marxist Party.

You blatantly lied about Friday’s speech. Let’s dispense with the faux outrage.

I am an Honorably Retired Combat Veteran with a 100% Disability Rating, and I am confident that I served more than twice as long, if not more, than you did, and I will question your love of America.

We can live debate that if your up to the challenge…https://t.co/vEI8Dc8x2O pic.twitter.com/CRgFiE7A0i

For the record Senator, there are thousands of disabled veterans and disabled citizens who support our President and would never think to use their disability as a crutch. You just did. You have used it before. Your sympathy card is declined. You have a duty to support POTUS.