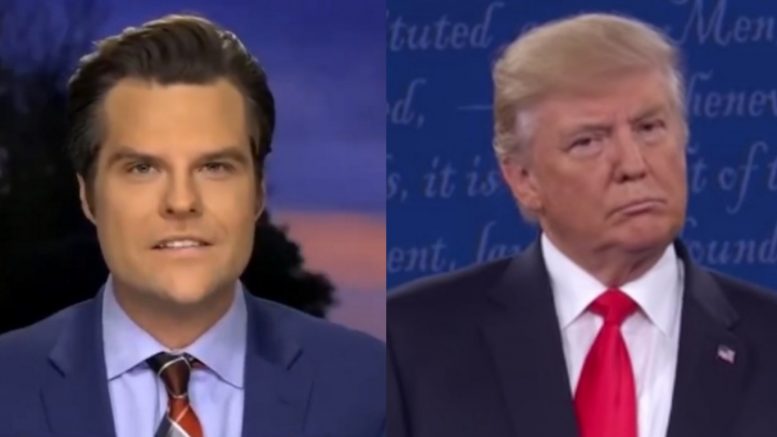 Congressman Matt Gaetz had some encouraging words for Trump supporters after speaking with the President over the weekend.

President Trump — who has been silenced by multiple social media platforms since last week’s unrest at the Capitol building –apparently told Gaetz that he will not resign prior to the January 20th inauguration despite the latest impeachment threat from House Democrats.

Related Article: Michelle Malkin: “Hundreds Of Thousands Of Peaceful Trump Supporters Are Being Smeared Over The Acts Of A Few”

It also appears that Trump is not considering removing himself from the public spotlight anytime soon, according to Congressman Gaetz.

“I spoke to President Trump today. He’s not resigning, and he is not leaving the public stage at all,” Rep. Gaetz told Fox News.

Gaetz continued: “Donald J. Trump remains the inspirational leader of a loving and patriotic movement — people who believe that America’s best days can still be ahead, people who support law enforcement and who need to stand up and fight against a radical left-wing agenda that it appears that Joe Biden intends to usher in with unified control over the government — with the House and the Senate.”

“President Trump continues to be the most powerful, the most influential Republican on the planet Earth. And it’s my expectation that while he’ll be leaving the White House in several days when his term is lawfully complete, that he will continue to weigh in on matters that are important to the tens of millions of Americans who voted for him — who believe that this election election process that we went through in 2020 still deserves more scrutiny and who expect that there will still be a constituency of people fighting for the America First agenda,” he declared.

President Trump is not resigning, and he is not leaving the public stage at all.

Donald J. Trump remains the inspirational leader of a loving and patriotic movement of people who believe America's best days can still be ahead. pic.twitter.com/lNrWffVrW6