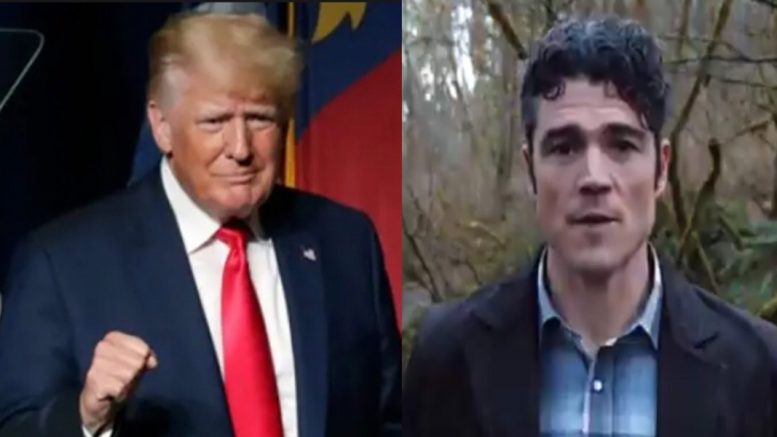 45th President Donald J. Trump issued a statement via email from his “Save America” PAC on Wednesday announcing his “Complete and Total Endorsement” for retired Green Beret and Gold Star husband Joe Kent, who is running as a Republican for Congress in the 3rd District of the State of Washington.

Kent is running against Congresswoman Jaime Herrera Beutler (R) who voted to impeach Trump after the January 6 protest at the U.S. Capitol.

In a statement on Wednesday, the 45th President said:

Joe Kent is a retired Green Beret and Gold Star husband running against RINO and incompetent Congresswoman Jaime Herrera Beutler in the 3rd District of the State of Washington.

Joe served his country proudly for many years and understands the tremendous cost of America’s wars in the Middle East, and elsewhere. In Congress, Joe will be a warrior for the America First agenda, unlike Jaime Herrera Beutler who voted, despite the facts, against the Republican Party and for the Democrats’ Impeachment Scam.

Joe Kent is strong on Crime and the Border, loves our Military and our Vets, and will protect our Second Amendment, which is under siege.

I met Joe at Dover Air Force Base on the evening that his wife was being brought back from the Middle East, where she had been killed in combat. It was a very sad moment in Joe’s life, but I was incredibly impressed with him and told him that he should someday run for office—we need his voice and leadership in Washington, D.C. Now he is running, and Joe Kent has my Complete and Total Endorsement! Continued Below

Joe Kent thanked the 45th Commander in Chief for his endorsement, writing on Twitter, “Thank you very much President Trump! I’m honored & ready to take our country back!”

Thank you very much President Trump!

I’m honored & ready to take our country back!

“Seeing the Establishment’s hubris and contempt for a President that represented the country’s will and the people’s best interests, I knew I had to act. However, this time my fight was to defend America First policies. No one asked me to do this. I sought out every opportunity and any media outlet that would give me a platform to use my twenty-year expertise physically fighting these wars to articulate how correct President Trump was,” Kent said in part on his campaign website.

Defending Trump’s policies gave me a taste of the savage fight we face against a hostile mainstream media and deeply entrenched political class. I eagerly sought out the opportunity to defend President Trump when The Atlantic, a well-known publication, printed slanderous accusations about the President.”