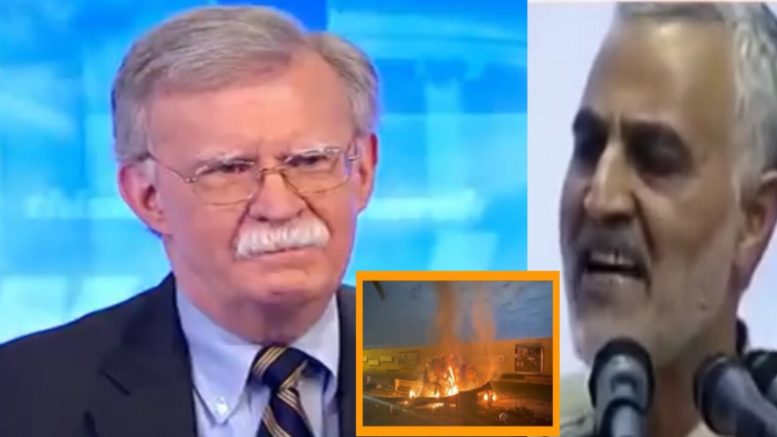 Former diplomat and national security advisor, John Bolton, commended the elimination of Soleimani and expressed that it could lead to “regime change” in Iran, which has been a longtime goal of Bolton.

Bolton, an Iran hawk, tweeted congratulations Friday morning to “all involved in eliminating” Soleimani and said the death of the powerful Iranian general was long in the making.

“Congratulations to all involved in eliminating Qassem Soleimani. Long in the making, this was a decisive blow against Iran’s malign Quds Force activities worldwide,” Bolton wrote.

“Hope this is the first step to regime change in Tehran,” he voiced. (Continued Below)

The Commander in Chief also took to Twitter Friday in a series of tweets declaring: “Iran never won a war, but never lost a negotiation!”

“General Qassem Soleimani has killed or badly wounded thousands of Americans over an extended period of time, and was plotting to kill many more…but got caught! He was, directly and indirectly, responsible for the death of millions of people, including the recent large number of PROTESTERS killed in Iran itself,” Trump wrote.

“While Iran will never be able to properly admit it, Soleimani was both hated and feared within the country. They are not nearly as saddened as the leaders will let the outside world believe. He should have been taken out many years ago!” the President said. (Video Below)

“The United States has paid Iraq Billions of Dollars a year, for many years. That is on top of all else we have done for them. The people of Iraq don’t want to be dominated & controlled by Iran, but ultimately, that is their choice. Over the last 15 years, Iran has gained more and more control over Iraq, and the people of Iraq are not happy with that. It will never end well!” the Commander in Chief added on Twitter.

Congratulations to all involved in eliminating Qassem Soleimani. Long in the making, this was a decisive blow against Iran's malign Quds Force activities worldwide. Hope this is the first step to regime change in Tehran.

We leave you Secretary of State, Mike Pompeo, who told “Fox & Friends” that President Trump’s decision to kill the top Iranian general was necessary to deter further aggression.

(Related: Nikki Haley On Qassem Soleimani’s Death: “His Demise Should Be Applauded By All Who Seek Peace And Justice”)