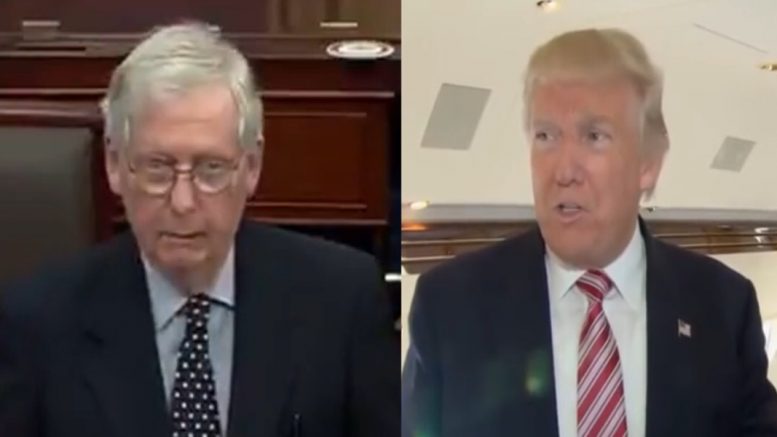 Senate Majority Leader Mitch McConnell (R-Ky.) on Tuesday blocked consideration of a House bill that would deliver $2,000 stimulus payments to most Americans — spurning a request by President Trump even as more Senate Republicans voiced support for the dramatically larger checks, the Washington Post reported on Tuesday.

The House on Monday, passed a bill to increase stimulus checks with a bipartisan 275-to-134 vote. The proposal, called the Caring for Americans with Supplemental Help (Cash) Act, aims to boost the $600 payments authorized in the massive year-end spending-and-relief package that President Trump signed Sunday by another $1,400 and expand eligibility for them.

President Trump reacted Tuesday on Twitter as pressure is growing for Senator McConnell to act on the $2,000 stimulus checks, along with another request from the Commander in Chief regarding section 230.

“Unless Republicans have a death wish, and it is also the right thing to do, they must approve the $2000 payments ASAP,” the Commander in Chief wrote.

“$600 IS NOT ENOUGH! Also, get rid of Section 230 – Don’t let Big Tech steal our Country, and don’t let the Democrats steal the Presidential Election. Get tough!” he urged.

The president’s reaction comes after he signed a $900 billion COVID-19 relief package Sunday, despite a remarkable video message he posted to social media last Tuesday, in which he called the bipartisan legislation a “disgrace.” However he released a statement outlining “wasteful items to be removed”, adding that he will “send back to Congress a redlined version, item by item, accompanied by the formal request to Congress insisting that those funds be removed from the bill”. Continued Below

“I am signing this bill to restore unemployment benefits, stop evictions, provide rental assistance, add money for PPP, return our airline workers back to work, add substantially more money for vaccine distribution, and much more,” President Trump said in a Sunday statement, announcing that he had signed the bill.

The president also said that he “will sign the Omnibus and Covid package with a strong message that makes clear to Congress that wasteful items need to be removed.”

“Congress has promised that Section 230, which so unfairly benefits Big Tech at the expense of the American people, will be reviewed and either be terminated or substantially reformed,” he stated. “Likewise, the House and Senate have agreed to focus strongly on the very substantial voter fraud which took place in the November 3 Presidential election. … Much more money is coming. I will never give up my fight for the American people!” Continued Below

The commission would examine many of the concerns President Trump has raised in the wake of the November presidential election and would “make recommendations to Congress to improve the security, integrity, and administration of Federal elections,” the bill states.

McConnell said senators will vote on the defense bill Wednesday, Count On 2 reported.

Part of McConnell's $2k payment proposal includes the creation of a bipartisan advisory cmte to study:
– election integrity
-Effects of Covid-19 on election practices
-Any laws that would have allowed fraudulent votes
-Produce precinct-by-precinct data report

“Republicans must support the $2000 payments and must FIGHT the crooked presidential election. We won big!” the president also wrote on Tuesday.

Levin Issues A Call To Action To All ‘Patriotic Americans’ In Wake Of The DNC: “Stand Up For Your Country Cause They’re Trying To Take It From You”