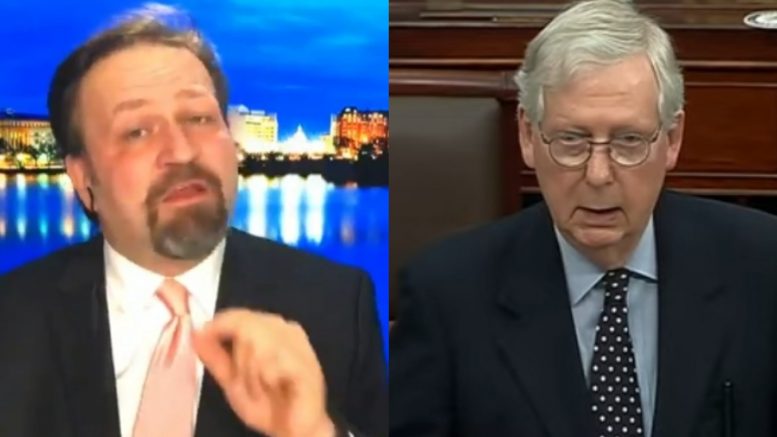 Sebastian Gorka has some tough words for Senate Majority Leader Mitch McConnell and “the rest of the RINOS” in the Republican Party on Tuesday for failing to back President Donald Trump on pending legislation and for their lack of support following the 2020 election.

Gorka reminded McConnell that regardless of who is inaugurated on January 20th, “business as usual” for establishment Republicans “is dead” thanks to President Trump. And he warned RINOS that they better “wake up and smell the coffee grinds” before it’s too late.

Related Article: Trump Reacts As Pressure Grows For McConnell To Act On $2,000 Stimulus Checks: “Unless Republicans Have A Death Wish…”

“When it comes to GOP, there’s only one question: Do you understand that this is Donald Trump’s party now? Who’s ever on the podium on January 20th, business as usual — the old RINO ‘scratch the Democrats’ back, they’ll scratch my back’ — is gone. It’s dead,” Gorka told Newsmax host Lyndsay Keith.

“If you think that you can go back to your old ways — Mitch McConnell and the rest of the RINOS — you will pay a hefty, hefty penalty in two years time,” he added.

“When that man (President Trump) came down those escalators and people laughed at him, then he crushed sixteen establishment candidates — one after another like he was chopping wood — that’s when Conservative politics changed forever,” Gorka said.

“And if they don’t wake up and smell the coffee grinds, there will be no GOP party left,” he declared. “So Mitch, something happened in 2016, then you better get with the program.”

Trump Reacts As Pressure Grows For McConnell To Act On $2,000 Stimulus Checks: “Unless Republicans Have A Death Wish…”

Don Jr. on if Trump Will Run in 2024: ‘If He Wakes Up One Morning & Feels Like Joe Biden Looks on a Daily Basis, He’ll Probably Say Now’s Not the Time’