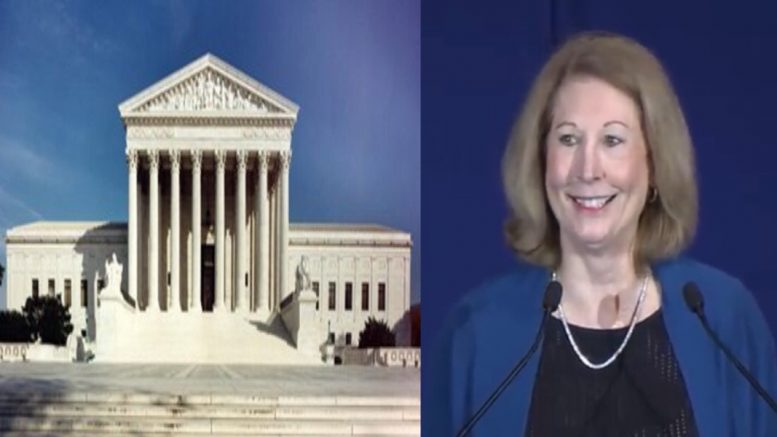 During a Tuesday radio interview on “The Rush Limbaugh Show” with Todd Herman, attorney Sidney Powell described mounting evidence of alleged election fraud, in which she has accumulated in the wake of the November presidential election.

Herman asked Powell during the interview, “Imagine you find yourself in an elevator with five Supreme Court Justices, and it’s along elevator ride. You’ve got 90 seconds… to convince them– to actually look at your evidence. How does Sidney Powell proceed?”

“The very night of the election many people saw something they had never seen before in the history of our elections. They saw votes being changed on the screen in front of them, going from President Trump to Mr. Biden.

On top of that, the morning after the election, even that night, the voting stopped. They stopped counting in multiple districts at the same time before the vote got to 270 electors for President Trump. That’s never happened before. The only time votes have ever stopped being counted in this country on election night was when the Broward County problem developed over the Hanging Chad’s in one county in FL. So for five states to stop counting on election night is absolutely unprecedented.

And they did it because the vote count for the electoral college was about to hit [+ go over] 270 for President Donald Trump, because of the massive outpouring of votes for him that night. By the next morning, multiple mathematicians had contacted me and told me they knew the algorithm that had been run to change the votes. It was that obvious to people with mathematical expertise. It is a mathematical impossibility for 100’s of thousands of votes to show up in the middle of the night for Vice President Biden alone, and to have been injected into the system the way that they were.” Continued Below

“We have eye-witness testimony of countless people who saw votes coming in, in unsecured containers and improper means, and looking different the night of the election. These people have come forward at great personal risk to themselves and their families to provide thousands of affidavits of voting abnormalities and actual crimes that they witnessed happen on election night. The very fact that the other side is working so hard to hide all of this. Federal law requires transparency in our electoral process and our elections.

There is a federal statute that requires all the documents pertaining to elections to be maintained for 22 months following an election, for the very reason that it has to be completely auditable. A Federal Judge in October in Atlanta, found all kinds of problems with the Dominion system that GA bought and crammed down for everybody across the state to use. That’s where the most problems have been, is in Georgia.

Witnesses have come forward, there was supposedly a water leak that they shut down voting for. That was an abject lie. We have video of witnesses pulling suspect ballots out from under a table after they ran off all the observers. Somebody told me that one of the people that did that has told government officials, how it happened and what happened. But has that information been provided to the public? No. There is rampant voter fraud of all kinds. Federal violations of 5 years and more across the country by virtue of all the misconduct on election night.” Continued Below

“The flipping of votes by Dominion is even advertised in their ability to do that, to run a fraction, to make a Biden vote count 1.26% and a Trump vote to only count 0.74%. They’ve done it before. They’ve done it in Venezuela. They done it in other foreign countries. They’ve done it in this country. We have evidence even that it was done in 2016 in California to benefit Hillary over Bernie [Sanders], and it’s been done in other local elections and smaller elections different places.

This is the only time it’s been this widespread, and the reason it didn’t work this time, they’ve been able to shave these votes for a long time, but the reason it didn’t work completely this time and they had to shut down in so many places was because so many Trump supporters poured out on the day of the election to vote for President President Trump in what was a landslide victory, a historic victory, is because it broke the algorithm.

That’s why they had to stop counting that night. That’s why they had to bring in ballots and try to back-fill. And it still doesn’t work, because there’s still 100’s of thousands more votes than there were voters to vote them. The math simply doesn’t add up. And if they had nothing to hide, why aren’t they providing transparency into the voting systems of the United States of America, the country that is founded upon the Rule of Law and is supposed to be above all this?

It is absolutely the most appalling criminal operation in the history of our country.” Video Below

Meanwhile, a group of Pennsylvania Republican lawmakers said they performed an extensive analysis of election day data and they’ve found “troubling” discrepancies, as previously reported by The Freedom Times.

A Monday press release from Pennsylvania State Rep. Frank Ryan explains how the PA lawmakers discovered discrepancies between the numbers of total votes counted and total number of voters who voted in the 2020 General Election which is making them question how the results could have been certified by Pennsylvania’s Governor Tom Wolf and Secretary of the Commonwealth Kathy Boockvar.

20/ Evidence arising in PA that more than 205,000 votes were counted when compared to the number of people who actually voted, via @SenMastriano 🇺🇸 ⬇️

I like that this was addressed to Deputy AG Richard Donoghue as well. For those who don’t know, his bonafides below. https://t.co/YaxsGhGzxh pic.twitter.com/JYw1fnzY88

As described by Ms. Powell, video captured at the State Farm Area in Georgia on election night allegedly shows suitcases of ballots being pulled out from under a table after GOP observers were told to leave for the night.