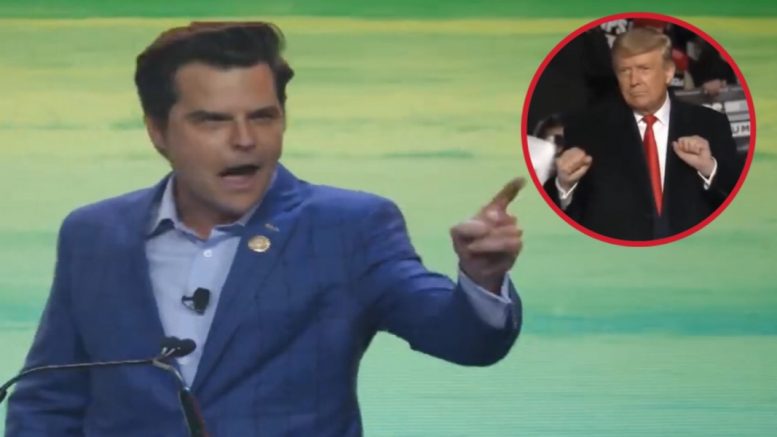 At least six lawmakers have agreed to object to electoral votes during the upcoming joint session of Congress, joining Rep. Mo Brooks (R-AL), the effort’s leader.

The Electoral College vote makes the result official, unless Congress blocks the January 6 count. Under an 1887 law, a congressman and a senator together can submit written objections to a state’s vote count.

Senator-elect Tommy Tuberville (R-AL) has implied that he would back a congressional challenge against the results of the Electoral College, which certified its votes in favor of Joe Biden last week.

Announcing his support to fight for President Donald Trump, Congressman Matt Gaetz (R-FL) said he would “object to electors from states that didn’t run clean elections” on January 6, 2021, when Congress is scheduled to certify the electoral college’s vote.

“On January 6th, I’m joining with the fighters in Congress. We’re going to OBJECT to electors from states that didn’t run clean elections,” Gaetz tweeted on Monday.

On January 6th, I'm joining with the fighters in Congress.

We're going to OBJECT to electors from states that didn't run clean elections.

Democracy is left undefended if we accept the result of a stolen election without fighting with every bit of vigor we can muster.

Rep. Gaetz also said during a speech on Saturday at Turning Point USA’s Student Action Summit event in West Palm Beach, FL that he would be objecting to the electors.

“And so on January 6th, I’m joining with the fighters in the Congress and we are going to object to electors from states that didn’t run clean elections,” the Florida congressman announced during his speech.

Rep.-elect Marjorie Taylor Greene (R-Ga.) told The Epoch Times earlier this month, “There’s three of us that have publicly said that we will refuse to certify Electoral College votes for Joe Biden, and I definitely have a very strong feeling that there will be more of us.”

“The number will grow, because I’m talking to a lot of people. Seventy-five million Americans voted for President Trump, and right now 70 percent of that number feel that the election was stolen and that fraud has taken place. We know that we have big problems here in Georgia. So I think this is definitely something the American people will be supporting us in our efforts,” Green said.

On Monday she tweeted, “On January 6, I will #FightForTrump”.

On January 6th, I will #FightForTrump

[email protected] should support @realDonaldTrump and join our objection on Jan 6th!

Look at how much President Trump’s endorsement tweet helped him! pic.twitter.com/OFPFsKTWUe

“I think as the process becomes more public and the media starts to get the word out that this is our plan, I feel like there’s good conservative people, ethical people—I’d love to see some Democrats join us,” Moore told The Epoch Times.

“I think we’ll have some join us, certainly some people who say they will stand by the president on the campaign trail—it’s time now to stand and to make sure we get this right,” he added.

Greene and Moore will be sworn in on January 3, 2021, three days before the joint session of Congress. Brooks won reelection. Continued Below

Rep.-elect Madison Cawthorn (R-NC) also announced Monday that he object to electoral votes during the upcoming joint session of Congress.

Cawthorn told a crowd at a Turning Point USA event in Florida, he will join the group planning to file objections. “When you look at what’s happened in a lot of these liberal swing states, that have liberal governors and liberal secretaries of state, you can see that they have broken the law and gone against our Constitution with this election. And so, because of that, on Jan. 6, as the people of western North Carolina sent me to do a job, I will be contesting the election,” he said.

He added on Twitter: “The right to vote in a free and fair election is the cornerstone of our Republic. Attempts to subvert the Constitutional authority of state legislatures to conduct elections strikes at the very heart of representative government. I choose to stand in the breach, to fight for us.”

The right to vote in a free and fair election is the cornerstone of our Republic. Attempts to subvert the Constitutional authority of state legislatures to conduct elections strikes at the very heart of representative government. I choose to stand in the breach, to fight for us. https://t.co/qmgG8o7qtF

**The Freedom Times will not call the race until all ongoing lawsuits and related matters have been resolved.