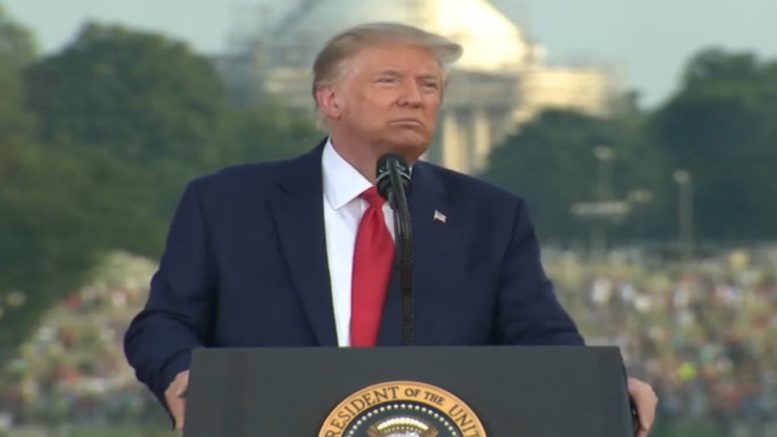 On the eve of the electoral college, President Donald Trump took to Twitter to declare that swing states in question, which have emergency filings in the Supreme Court, “cannot legally certify” their election results, amid allegations of voter fraud, in the wake of the 2020 November election.

The Electoral College meets Monday, December 14, to formally elect the next president. On January 6, members of Congress will convene to count the electoral votes and officially declare the winner. The joint session, however, also allows members to object to returns.

The “college” consists of 538 electors, and 270 votes are needed for a candidate to win the presidency. The number of electors in a state is equal to the number of members in the state’s congressional delegation. The District of Columbia has three electors. After a state’s vote totals are certified, its governor prepares a Certificate of Ascertainment with the names of the winning electors and the number of votes, reported by NBC News.

Once the votes are cast and the candidate passes the 270 mark, the winner would officially be president-elect. The Electoral College vote makes the result official, unless Congress blocks the January 6 count. Under an 1887 law, a congressman and a senator together can submit written objections to a state’s vote count.

Rep. Mo Brooks (R-AL) has already announced his intention to do so. Republican Sen. Rand Paul (KY) told CNN he is not ruling out joining Brooks to object and challenge election results. If Rep. Brooks is successful in finding a partner, the count would stop and the Senate and the House would separately debate the objection on the disputed state’s vote for up to two hours. Then the House and the Senate would vote on whether to sustain the objections.

The Commander on Chief on Sunday, wondered, “How do states and politicians confirm an election where corruption and irregularities are documented throughout? A Swing State hustle!” adding, “MOST CORRUPT ELECTION IN U.S. HISTORY! Continued Below

President Trump continued on Twitter: “The RINOS that run the state voting apparatus have caused us this problem of allowing the Democrats to so blatantly cheat in their attempt to steal the election, which we won overwhelmingly. How dare they allow this massive and ridiculous Mail-In Voting to occur. Tens of millions of haphazardly ballots sent, with some people getting two, three, or four ballots. We will never give up!”

He went on to imply that his appointed Justices Brett Kavanaugh, Neil Gorsuch, and Amy Coney Barrett “chickened out”, following the U.S. Supreme Court rejecting a lawsuit brought by the state of Texas and backed by several states and Republican leaders, including the President himself.

“The fact that the Supreme Court wouldn’t find standing in an original jurisdiction matter between multiple states, and including the President of the States, is absurd. It is enumerated in the Constitution. They just ‘chickened out’ and didn’t want to rule on the merits of the case. So bad for our Country!” President Trump expressed on Twitter. Continued Below

President Trump then declared that swing states “cannot legally certify” their election results because of alleged “voter fraud” and announced, “THIS ELECTION IS UNDER PROTEST!”

“Swing States that have found massive VOTER FRAUD, which is all of them, CANNOT LEGALLY CERTIFY these votes as complete & correct without committing a severely punishable crime,” the president warned on Twitter, Sunday afternoon.

“Everybody knows that dead people, below age people, illegal immigrants, fake signatures, prisoners, and many others voted illegally. Also, machine “glitches” (another word for FRAUD), ballot harvesting, non-resident voters, fake ballots, “stuffing the ballot box”, votes for pay, roughed up Republican Poll Watchers, and sometimes even more votes than people voting, took place in Detroit, Philadelphia, Milwaukee, Atlanta, Pittsburgh, and elsewhere. In all Swing State cases, there are far more votes than are necessary to win the State, and the Election itself,” he explained, appearing to refer to witness’ testimonies, which have been heard during several hearings after the election.

“Therefore, VOTES CANNOT BE CERTIFIED. THIS ELECTION IS UNDER PROTEST!” the Commander in Chief proclaimed. Continued Below

(Related: Powell On Trump’s 2018 Executive Order: ‘Under The Emergency Powers, He Could Appoint A Special Prosecutor To Look’ Into Voting Machines)