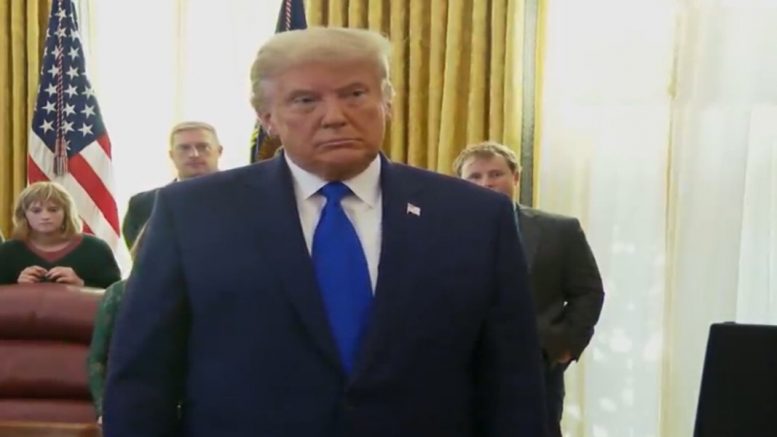 “I call in to wish everybody a very Merry Christmas,” said President Trump during the interview, before weighing in on alleged voter fraud that took place during the 2020 November election.

“And as you know, Rudy and his team, and myself, and a lot of other people, and frankly, millions of people all over the country, we have uncovered voter fraud– the greatest voter fraud in history. It is the most corrupt election this country has ever had by far,” said President Trump.

“We’ve already found the answers, now we have to get some support from some politicians. Other than that, we have it made,” he said. “I think we’ve come a long way in a very short period of time.”

Rudy Giuliani weighed in, suggesting, “How about letting us examine the machines in six cities, six counties. We will examine them in open and in public, and let’s see who won”.

The president responded: “The machines, number one, every machine we’ve looked at, you know the results there have been– but you know, the machines and also the signature verifications. Let us see the signatures, in Fulton County in Georgia and a couple of other places. Let us see the signatures. You’ll find that hundreds of thousands of signatures either don’t exist or were fraudulently written. No matter where you look … you’re gonna find it, but we’re trying to work. It’s a very difficult thing because of the governor and the secretary of state.” Continued Below

The president said that on Monday, Georgia officials will “start signatures counts”, but they are “not starting signature verifications” nor “starting them in the right location”. He added, “They are starting them in locations, which are not very troubled, and we’ll still find a lot, even in those areas, but they should let us do signature counts in the proper locations. You will see hundreds of thousands fraudulent signatures or signatures that don’t even exist.”

The Commander in Chief also noted that he spoke to Tommy Tuberville (R-AL), noting that the Senator-Elect is “so excited”, adding, “He said, ‘You made me the most popular politician in the United States.’ He said, ‘I can’t believe it’. He’s great, a great senator.”

Last week, President Trump praised the incoming senator after reports surfaced that the freshman lawmaker may back Alabama Congressman Mo Brooks’ Electoral College challenge. In a tweet, Trump called Tuberville “a great champion and man of courage.” Video Below

“More Republican Senators should follow his lead,” the President tweeted on Thursday. “We had a landslide victory, and then it was swindled away from the Republican Party – but we caught them. Do something!”

President Trump concluded his Sunday interview by saying, “We’re getting closer and closer, and I hope you let everyone know we’re actually very close. The fake news will not tell you that. They don’t want want to talk about it. They’re trying to suppress it. We don’t have freedom of the press at all. It’s suppress news.”

“It’s a terrible thing that’s happened in our country. … It started a long time ago, but it’s gotten to a point– it’s just a terrible thing. It’s not freedom of the press, and we’re gonna bring that back, because the press is so suppressed. It’s so dishonest. I don’t even call it fake news anymore, I call it corrupt news,” he added.

"We're getting closer and closer. And I hope you let everybody know, we're actually very close."

Listen to President @realDonaldTrump's interview on @77WABCradio. @RudyGiuliani is right. The people are behind you, Mr. President!