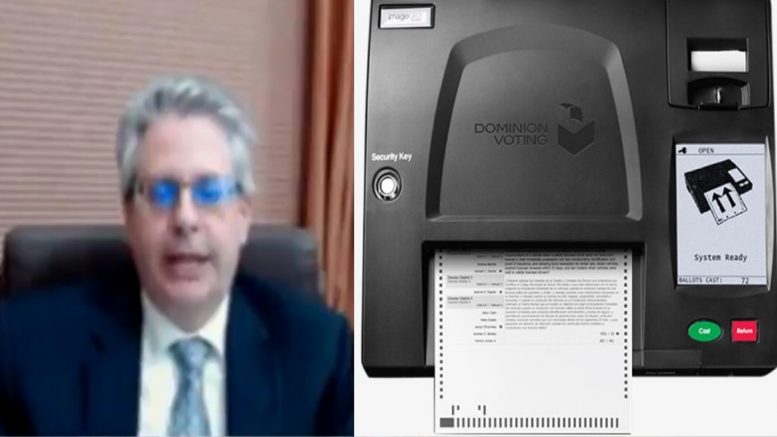 A judge in Michigan on Monday permitted parties in a court case to release the results of a forensic imaging examination of Dominion Voting Systems machines, with redactions of code.

13th Circuit Judge Kevin Elsenheimer agreed to remove a protective order that was blocking the release of the report on the request of attorney Matthew DePerno.

“Significantly, the computer system shows vote adjudication logs for prior years; but all adjudication log entries for the 2020 election cycle are missing. The adjudication process is the simplest way to manually manipulate votes. The lack of records prevents any form of audit accountability, and their conspicuous absence is extremely suspicious since the files exist for previous years using the same software,” the report, authored by Russell Ramsland, states. Continued Below

“These errors resulted in overall tabulation errors or ballots being sent to adjudication. This high error rates proves the Dominion Voting System is flawed and does not meet state or federal election laws,” he added. “Because the intentional high error rate generates large numbers of ballots to be adjudicated by election personnel, we must deduce that bulk adjudication occurred. However, because files and adjudication logs are missing, we have not yet determined where the bulk adjudication occurred or who was responsible for it. Our research continues.” Continued Below

The Michigan Secretary of State has ordered deletion of e-poll books and other evidence, and has taken affirmative steps to seal forensic evidence regarding the flaws in the operation of Dominion machines from the public view and also from legislators.

MI Attorney General is threatening legislators w criminal investigation and possible prosecution if they disagree with her, and the MI Governor and other officials are shutting down the peoples’ house and preventing them from gathering today to perform their constitutional duty.