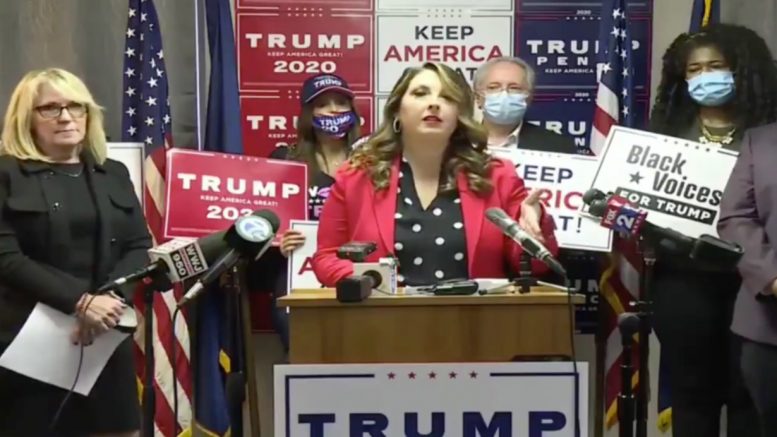 McDaniel and Cox also reported that there was a software glitch in Michigan’s Antrim County which incorrectly directed votes to presidential candidate Joe Biden, noting that “47 counties [in Michigan] use this same software in the same capacity”.

“In Antrim County ballots were counted for Democrats that were meant for Republicans causing a 6000 vote swing against our candidates,” Laura Cox said. “The county clerk came forward and said, ‘Tabulating software glitched and caused a miscalculation of the votes'”.

She continued: “Since then, we have now discovered that 47 counties use this same software in the same capacity. Antrim County had to hand count all of the ballots, and these counties that use this software, need to closely examine their result for similar discrepancies. The people of Michigan deserve a transparent and open process.”

Michigan GOP Chair: Dozens of Michigan counties used the same software that caused 6,000 votes in one county to switch from Trump to Biden.

"These counties that used this software need to closely examine their result for similar discrepancies." pic.twitter.com/ZK3uUcogNB

Ronna McDaniel said in Oakland County, Michigan, “2000 ballots were given to Democrats that were Republican ballots due to a clerical error”, adding, “In Wayne County Republican poll watchers were denied their legal right to monitor the election and purposely kept in the dark both literally and figuratively with poll watchers blocking windows, windows in padlocking doors.”

“There are hundreds of reporters of our poll watchers being intimated and unable to do their job. … At the TCF Center in Wayne County, we have received over 100 incident reports of irregularities. This is a massive mail-ballot-center, and we need time to go through these reports and investigate them,” McDaniel stated.

The RNC Chairwoman listed an example, saying, “On November 3rd and 4th, a whistleblower was assigned to work on problem ballots at the TCF Center and Judication Center. This is not a Republican poll worker, this is an actual election worker– a bundle of ballots with no receive date were brought to the whistleblower. The ballots should not have been immediately counted because there was evidence the ballots were received by the state mandated deadline of November 3rd.” Continued Below

McDaniel also said that “on the morning of November 4th, the whistleblower was instructed by their supervisor to take the ballots with no dates, enter them into the electronic record, and place either November 2nd or November 3rd as the date received”.

“This is our democracy. To see people not be able to observe in Democrat-run cities across the nation, is not okay. We need to pursue these irregularities, and we need people to be patient, give us the time to investigate. These are serious allegations of changing the date on ballots and refusing to let people observe in a meaningful way of an election of this magnitude,” McDaniel added. Video Below

We have documented irregularities in Michigan.

In Wayne County, poll watchers were kept in the dark with blocked windows & padlocked doors.

At the TCF Center, a whistleblower said their supervisor asked them to illegally put dates on ballots. pic.twitter.com/VX5Lt0MYuK