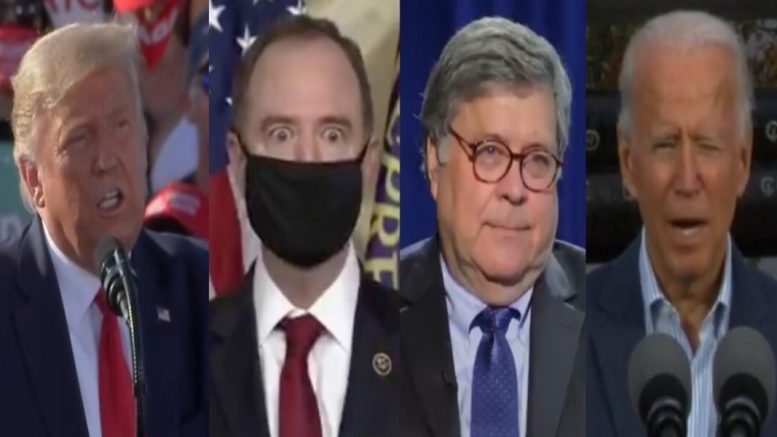 During an interview Tuesday on “Fox & Friends”, the Commander in Chief slammed House Intelligence Chairman Adam Schiff (D-CA) after he claimed that the scandal surrounding Hunter Biden’s laptop is part of some kind of Russian disinformation campaign.

Beginning on Friday, Schiff and other Democrats tried to write off damning emails and other files that were allegedly recovered from Hunter’s laptop as nothing other than a “smear on Joe Biden” that originated from “the Kremlin.”

“Let me be clear, the intelligence community doesn’t believe that because there’s no intelligence that supports that,” Ratcliffe said in response to Schiff’s theory. “And we haven’t shared any information with Chairman Schiff or any other member of Congress that Hunter Biden’s laptop is part of some Russian disinformation campaign. It’s simply not true.”

When asked about Democrats claiming that Hunter’s laptop is a “Russian disinformation campaign”, President Trump said, “It’s just crazy. I saw Schiff, Schiffty- Schiff yesterday get up and say, ‘This is Russia’. Yeah, I mean he’s a sick man. He is so sick. We went through two-and-half years of that, plus. And this guy– he ought to be put away, or something should happen with him. I watched him look straight at the camera and say it. And he laughs at it, they laugh in the back rooms at it.”

“And thank goodness we have John Ratcliffe that came out, the head of DNI. He said it’s absolutely false, it’s nothing to do with Russia. And it never did have to do with [Russia]. … Adam Schiff ought to be investigated for what he does. He stood up, he looked at the camera, and he said the laptop conceived and dedicated by Russia. This is crazy,” the president expressed. Continued Below

On Monday, Congressman Andy Biggs (R-AZ) and ten Members of Congress sent a letter to U.S. Attorney General William Barr, requesting that the Department of Justice immediately appoint an independent, unbiased special counsel to investigate recent issues that have been raised about former Vice President Joe Biden’s involvement with his son’s business dealings.

“We request that the Department of Justice immediately appoint an independent, unbiased special counsel to investigate the issues that we have raised – as well as any corresponding legal or ethical issues that might be uncovered from the former vice president’s 47 years in public office,” the letter to AG Barr reads in part.

Asked if he will appoint a special prosecutor to investigate Biden’s involvement with his son’s business dealings, the Commander in Chief said, “We’ve got to get the attorney general to act.” Video Below

(Related: Trump Steps Off The Airplane & Rips Journalist Over Hunter’s Alleged Laptop: “You’re A Criminal For Not Reporting It”)