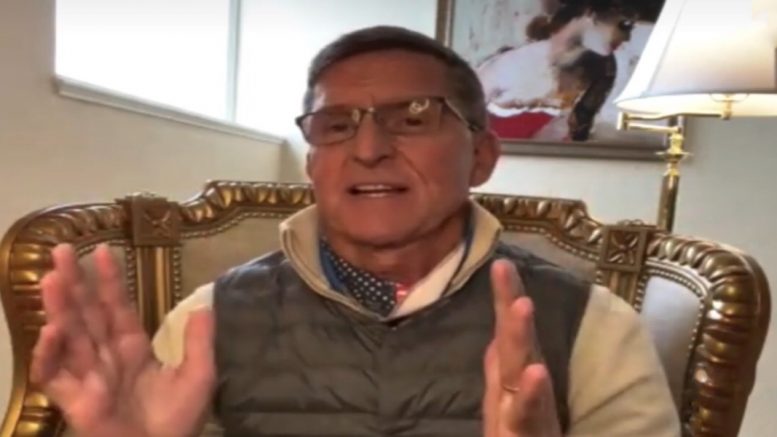 Former National Security Advisor General Michael Flynn spoke to host Maria Bartiromo on Fox News’ “Sunday Morning Futures”, in the wake of the 2020 November election and his full pardon from the president.

General Michael Flynn, former White House Security Advisor, was recently granted a pardon by the Commander in Chief on November 25, bringing to end a tumultuous four-year criminal case that felled the three-star general before prosecutors reversed course and declared they had improperly pursued his prosecution.

“There’s a whole number of paths that the president has. Like I say, asked on a scale of 1-10, who will be the next president? I say, ’10, Donald Trump'”, the retired United States Army lieutenant general predicts.

“Sidney Powell has four lawsuits pending at the Supreme Court, and there are other Supreme Court suits that are pending today and will probably be played out this week,” the three star General pointed out.

Mr. Flynn referenced Sidney Powell’s emergency filings in the Supreme Court that filed on Friday for Georgia, Michigan, and Arizona. Powell is also planning on filing in Wisconsin.

“I would also add that we have conclusive evidence of foreign interference in our election, and it’s available to the public right now at DefendingTheRepublic.org or at Kraken-Wood.com. And that to me, … you have the DNI coming up, I think this Friday, with a report on a whole range of issues,” General Flynn said.

“If [John Ratcliffe] does the duty that I think he is very capable of doing, and the intelligence community provides a clear unfiltered assessment, then they’re gonna discover that. And one of the things that I would recommend if I were the DNI, or certainly if I were the national security advisor, I think that the President of the United States has to trigger his executive order of 2018 and probably appoint a special counsel to look into all of this,” General Flynn recommended.

In September 2018, President Donald Trump signed an executive order on imposing certain sanctions in the event of foreign interference in a United States election and declared a national emergency to deal with this threat.

Not later than 45 days after the conclusion of a United States election, the Director of National Intelligence, in consultation with the heads of any other appropriate executive departments and agencies (agencies), shall conduct an assessment of any information indicating that a foreign government, or any person acting as an agent of or on behalf of a foreign government, has acted with the intent or purpose of interfering in that election, according to the executive order signed by President Trump.

The assessment shall identify, to the maximum extent ascertainable, the nature of any foreign interference and any methods employed to execute it, the persons involved, and the foreign government or governments that authorized, directed, sponsored, or supported it. The Director of National Intelligence shall deliver this assessment and appropriate supporting information to the President, the Secretary of State, the Secretary of the Treasury, the Secretary of Defense, the Attorney General, and the Secretary of Homeland Security, per the president’s executive order.

General Flynn went on to say of the 2018 executive order: “And what that does is slow everything down and has to put on a fast track to be able to determine exactly what happened. Because we have serious, serious foreign influence problems with this Dominion voting machines.”

Asked if he can prove there was foreign inference, despite Dominion denying that they deleted votes for Donald Trump and switched votes to Joe Biden, Flynn told Bartiromo, “There’s evidence already. And like I said, go to DefendingTheRepublic.org and in there is the evidence. It’s clear. And why not?” he asked.

“From my perspective as in the position that I have been in, but also as an American citizen, why not go and look at this thing? I know that there is a preliminary review being done up in Antrim County. … But why not look into this if in fact, the evidence that we have is true? We definitely believe that it is true. There’s clear, clear evidence. What we have to stop doing is saying, ‘Well, nothing to see here. We’re gonna continue to march down the road towards a false inauguration’, which the country will not allow that right now,” General Flynn added. Video Below

Sidney Powell on “emergency filings in Supreme Court” for Georgia, Michigan, and Arizona”:

You can also read the evidence at HereIsTheEvidence.com

“… Through our lawsuit we were able to get access to the Dominion Voting System program and my team went on last Sunday, and we took forensic images on that computer system, 16 CF data cards, 16 thumb drives, and we got the forensic image of the actual tabulation machine in the Antrim County clerk office,” DePerno told Newsmax.

The results have not been “disclosed”, according to Kevin McCullough, is “because the attorney general, an elected Democrat by the name of Dana Nessel, in the state of Michigan, had ordered the disclosure to be stopped”, adding that a judge “ruled in favor” of Nessel stopping the public from knowing the forensic audit results of the Dominion voting machines.

(Related: General Flynn At Jericho March In D.C.: “We Will Win!…The Truth Will Prevail…There Are Paths Still In Play”)

Jon Voight Comes Forward With A New Powerful Statement In Support Of Trump: ‘I’m Honored To Call Him President Trump’