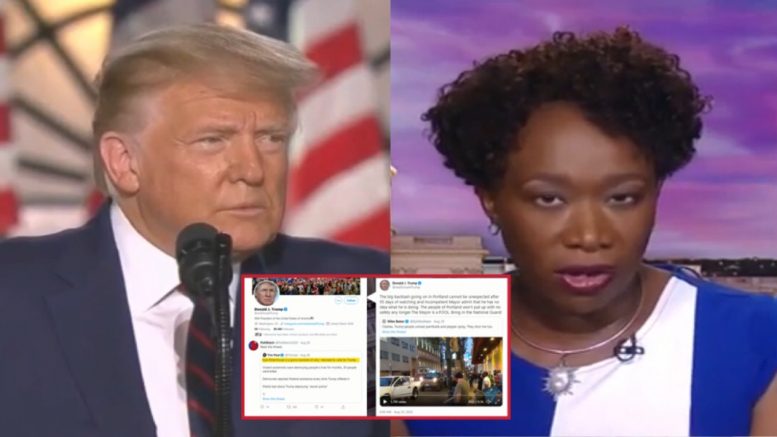 During a Monday airing of MSNBC’s “The Readout”, host Joy Reid compared President Donald Trump’s retweet[s] on Twitter to how “Muslims act” when “radicalizing” people.

Reid displayed for her viewers, tweets from President Trump that he apparently “liked” or “retweeted” regarding Kyle Rittenhouse, a tweet which was “blasting Portland’s mayor”, and a video of a Trump supporter shooting “paintballs” at protesters in Portland.

Joy Reid claimed that the President was “encouraging” his base, and played a video clip from a White House briefing, in which press secretary Kayleigh McEnany denied that President Trump had even seen the video of Trump supporters shooting paintballs.

McEnany responded to a CBS News White House correspondent Monday, saying that she does not “think the president has seen that video”, adding, “Nor have I.”

“You know, when leaders, let’s say in the Muslim world, talk a lot of violent talk and encourage their supporters to be willing to commit violence, including on their own bodies, in order to win against whoever they decide is the enemy– we in the U.S. media describe that as they are radicalizing those people,” Reid said.

“Particularly when they are radicalizing young people,” Joy Reid continued. “That’s how we talk about the way Muslims act. When you see what Donald Trump is doing, is that any different from what we describe as radicalizing people?” Video Below

Critics on both sides of the aisle, took offense to Reid’s remarks:

Honestly, this kinda of casual Islamophobia is hurtful and dangerous.

We deserve better and an apology for the painful moment for so many Muslims around our country should be forthcoming. https://t.co/megnZyL9dd

This is not good @JoyAnnReid. https://t.co/DqJSR30vmb

If Tucker Carlson said about Muslims what @JoyAnnReid just did, there would be an immediate FireTucker hashtag going (rightly so) among #TheResistance.

They all will be silent on this though https://t.co/DhPaJQ0GeI

Last night @JoyAnnReid said on air that Muslims are violent extremists. This anti-Muslim smear invites white nationalist violence against our community. Reid and MSNBC must apologize and commit to meet with Muslim leaders: https://t.co/65R3k17B7H

Democrats are pouncing on @JoyAnnReid for being Islamophobic.

I wonder if she will return the fire and call them racist? 😂🤣

Joy Reid just basically said Trump supporters are so violent they are like Muslims. Wow.

These remarks are pretty appalling. Joy Reid's subtext is more or less that Trump is "radicalizing" his supporters, just like barbarians abroad do – "the way Muslims act" is racism plain and simple. https://t.co/HB9eQc2MyC

Is it just me, or does Joy Reid's #ReidOut program exist EXCLUSIVELY to fan the flames of racism?

(Related: Joy Reid Says Trump’s ‘Hungry Constituency Were White’, Who Voted To Take ‘This Country Back From Brown People, The Immigrants’)