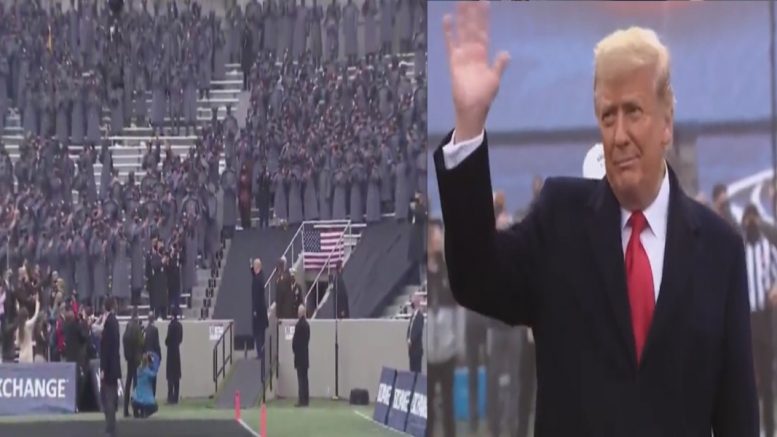 The Commander headed to Saturday’s Army-Navy football game at the U.S. Military Academy’s homefield in West Point, New York, which will mark the first time the storied rivalry will be held at an academy’s field since 1943. Saturday’s encounter will be the 121st game between the two service academies, as previously reported by The Freedom Times.

The game generally takes place at a neutral field. It had been scheduled to be played at Philadelphia’s Lincoln Financial Field, but limits on the size of the crowd due to the COVID-19 pandemic would have prevented all midshipmen and cadets from attending. Students from both schools will be at Michie Stadium, but no fans, Military Times reported.

As President Trump made his grand entrance on to the field to participate in the coin toss ahead of the game, the Commander in Chief was greeted with thunderous “USA!” chants from the crowd.

The military knows who their Commander in Chief is:

President Trump getting some love from the crowd at the Army – Navy Game pic.twitter.com/DB12EfBzrT

President Trump participated in the coin toss for the Army/Navy football game:

President Trump does the coin toss for the Army/Navy game pic.twitter.com/Tio72iBrsg

(Related: WATCH: President Trump Flies Over The ‘March For Trump’ In D.C. Before Heading To The Army-Navy Football Game)