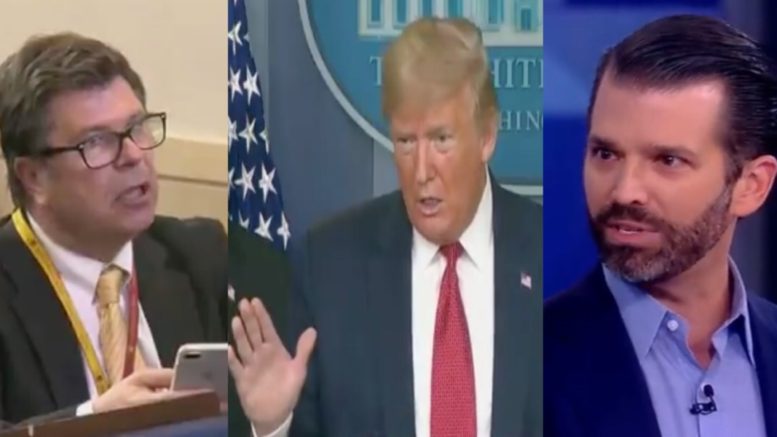 Wednesday during the White House Coronavirus Task Force briefing, President Trump fired back at a reporter who had asked: “How many deaths are acceptable?” pertaining to the coronavirus pandemic.

White House reporter, Douglas Christian, brought up comments from Dr. Ashish K. Jha, director of the Global Health Institute at Harvard, who had said that the fastest way to restart the economy would be to test everyone, to identify all individuals in need of quarantine or isolation, and then allow everyone else to go back to work immediately.

Jha made his comments during an NPR interview on Sunday, where he sharply criticized the Trump administration’s slow response and called it out for continuing to ration tests, saying, ”we’re still far behind.” Jha went to recommend a massive testing campaign that was two to three times larger than the current rate, so the country could quickly quarantine and treat as many infected individuals as possible, Mediate reported.

“Would you subscribe to that strategy?” Douglas Christian asked President Trump.

“No,” the president responded. “But we have tested more than anybody.”

“And if not, how many deaths are acceptable?” Christian then asked. (Continued Below)

“How many? None,” the Commander in Chief fired back. “How deaths are acceptable to me? None, OK? None. If that’s your question.”

“Look, I saw him. I saw his statement,” the president continued, referring to Dr. Ashish K. Jha. “We have tested by far more than anybody. We’re testing more than anybody right now. There is nobody even close. And our tests are the best tests. They’re the most accurate tests.”

“But if you’re saying we’re going test 350 million people, I watched his statement. I disagree with it,” President Trump added. (Video Below)

Donald Trump Jr. responded to the reporter’s question and wrote on Twitter: “Media being media. Are you F-ing kidding me? The task force is going nonstop to protect and save American lives and jobs and this is the kind of shit they come up with.”

“Their hatred of America & it’s people is getting even worse if that was even possible,” Trump Jr. expressed.

Reporter: “How many deaths are acceptable?”

President Trump: “None. How many deaths are acceptable to me? None.” pic.twitter.com/2d88vP4DYp

(Related: Trump Fires Back After Reporter Implies His Easter Timeline Is Based On ‘Political Interests’)

James Woods: “A Dishonest, Biased Press, Hijacked By The DNC, Is Not Only Unnecessary, But A Danger To A Free Republic”